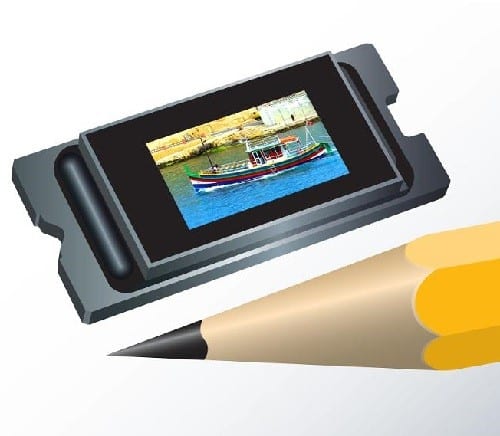 The global semiconductor design and manufacturing company Texas Instruments Incorporated (TI) has announced that the 0.47 in (12 mm) TRP Full-HD 1080p chipset for video and data display applications is available to its third-party developer network. Based on the DLP Cinema technology used in more than 80% of digital theatres worldwide, Texas claims that the 0.47″ chipset is the smallest TI chipset capable of generating brighter, more efficient full high-definition projection displays from small form-factor electronics.

It will be interesting to see what the third-party developer network will create with this novel chipset, since a lot of potentials lies in this display. The Dallas based company pledges full-HD resolution that delivers twice the resolution of its same-size predecessor. The compact size enables end-user products in many form factors. A low power consumption allows for use in battery-powered applications, such as mobile projectors and wearables. Example applications include mobile projectors (battery and AC-powered), screenless TVs, control panels, interactive displays and wearables, such as near-eye displays.

To accelerate developers’ ability to bring their innovative products to market, TI told to maintain the most extensive ecosystem of pico optical engine manufacturers in the industry, eliminating the need for developers to have their own optics expertise. Members of this third-party ecosystem are now developing optical engines that incorporate the Full-HD chipset.

Availability and package
The display chipset will be available in early 2015 for purchase from the TI Store in evaluation quantities and from TI-authorized distributors in high-volume quantities. It includes the DLP4710 digital micromirror device, which will be offered in a 100-pin FQL package. Other components in the chipset are the DLPC3439, which will be available in a 201-pin VFBGA package, and the DLPA3005 that will be offered in a 100-pin HTQFP package.