The CRISPR/Cas9 toolbox has been expanded with fluorescent Cas9 and a dCas9 functionalized with a tag able to activate gene expression that can be transfected to cells directly as ribonucleoprotein complexes (RNP). 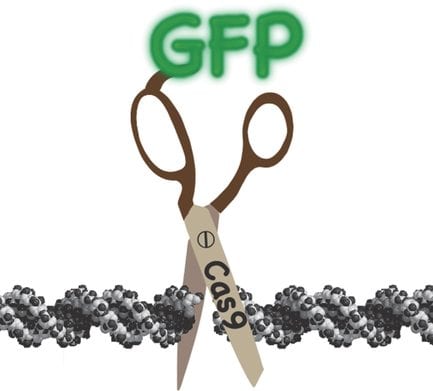 The CRISPR/Cas9 system has become the method of choice to manipulate genomes due to its simplicity and efficiency. Simply put, the “molecular scissors” protein Cas9 is guided by a specific piece of “guide RNA” complementary to the DNA target sequence where the endonuclease activity of Cas9 makes a cut; the break can then be repaired by an endogenous DNA repair mechanism to introduce random mutations or to “paste” a specific sequence based on a co-delivered template.  However, the system offers other possibilities beyond simple “cut and paste” through customization of the Cas9 activity. This can be done by fusing the Cas9 protein or its “nuclease dead” version dCas9, which will only bind but not cleave the DNA, to another protein or an active domain.

Cas9 fusion proteins have so far been used as plasmid-expressed versions. Mircetic, Buchholz and colleagues have expanded the CRISPR/Cas9 toolbox with fluorescent Cas9 and a dCas9 functionalized with a tag able to activate gene expression that can be transfected to cells directly as ribonucleoprotein complexes (RNP). Delivering Cas9 directly as RNP is advantageous because it provides an efficient on-target activity while reducing off-target cleavage. 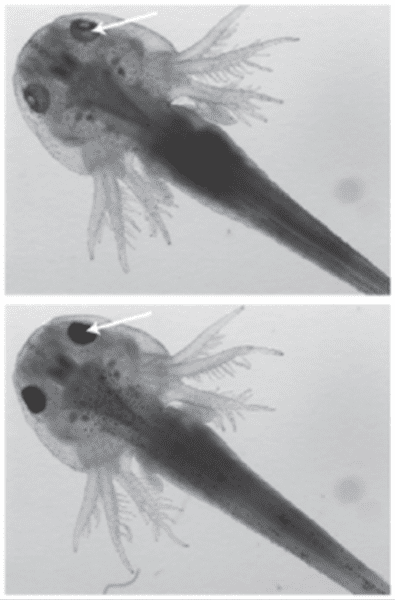 The researchers produced and purified recombinant Cas9 fused to green and monomeric red fluorescent proteins and dCas9 fused to the bipartite gene activator VP64-Rta. The active Cas9-FP and dCas9-VP64-Rta contained a nuclear localization signal and were successfully delivered to tissue culture cells, mouse embryonic stem cells and to axolotl embryos in the form of RNP. The image shows a control embryo (bottom) and an embryo injected with Cas9-FP RNP  targeting the Tyr gene, the disruption of which leads to loss of pigmentation in the eye, indicated by the white arrow.

The fluorescent variants are useful to significantly improve the targeting efficiency because the successfully transfected cells can be easily enriched by fluorescence-activated cell sorting (FACS). The current paper in Small Methods paves the way to a widespread use of Cas9 fusion variants that can be directly transfected as RNP to enable advanced genome manipulation combining both high-efficiency cleavage and control of gene expression. As a bonus for the interested reader, the paper also presents pilot experiments with Cas9 fused to different cell penetrating peptides that can facilitate delivery to cells without the use of a transfection reagent.