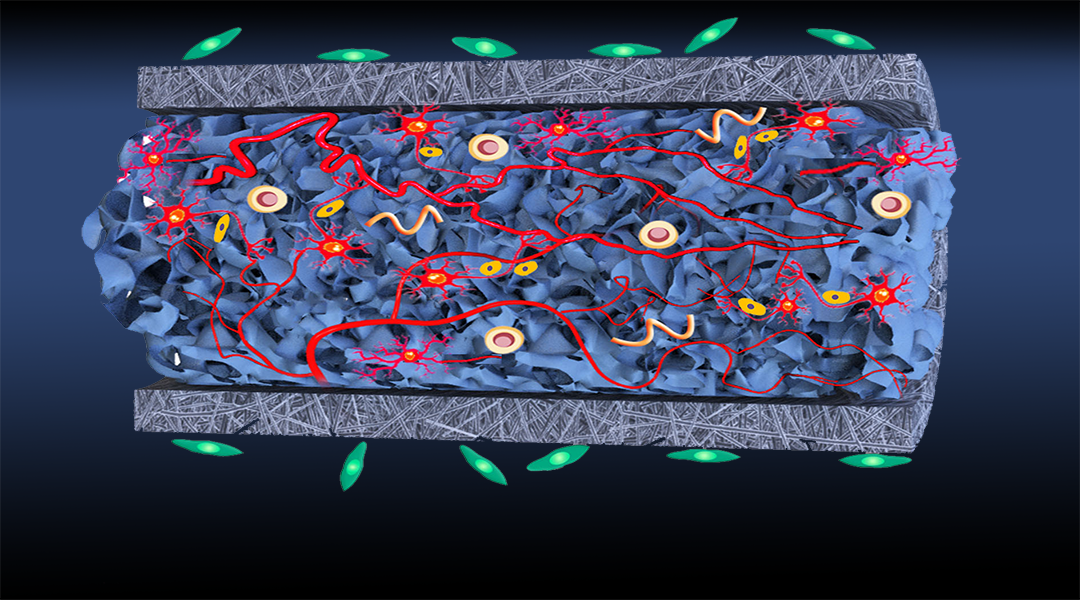 Nerve damage following a traumatic injury can lead to life-long problems ranging from impaired sensory and motor function, to complete paralysis below the point of damage. The ability to repair damaged nerves is therefore a major challenge for the medical community, but the complex and fibrous microstructure of nerve tissue means full restoration of nerve function is very difficult.

Researchers at the Chinese State Key Laboratory of Advanced Technology for Materials Synthesis and Processing have been conducting materials-based research on how to overcome such obstacles.

One of the leaders of this work, Professor Xinyu Wang, is well aware of these challenges and previous attempts to tackle them. “Many attempts have been made to repair nerve gaps,” he said, “wherein the use of [nerve segments obtained from the same patient] achieves favorable results, but it sacrifices patients’ normal nerves and may lead to neuropathic complications.”

Alternatives to this method—known as autografting—have been developed, such as ways of guiding nerve regeneration without taking the cells of healthy nerves from elsewhere. One such method is the use of basic tube-like nerve guide conduits (NGCs). “However, axon regeneration across a 30 mm-long defect was quite poor in contrast to the autograft.”

As such, Wang believes that NGCs need much improvement, which is where his and his team’s work comes in. They have developed an NGC that, like conventional NGCs, consists of a tube-like structure, but which is also filled with a sponge-like material.

The hollow-tube NGC was made from electrospinning of poly(lactic-co-glycolic acid) (PLGA), and the sponge was made from oxidized bacterial cellulose (OBC) cross-linking collagen (COL). Collagen is an important component in the extra cellular matrices (ECMs) of nerve cells, and so using this in the NGC was considered a good means to promote natural neural regrowth. The as-prepared OBC–COL intraluminal sponge filler nerve guide conduit was thus dubbed “ISF-NGC”.

As Wang explains, “The newly developed ISF-NGC fulfills a superior nerve repair effect over a hollow NGC and many previously reported NGCs. The considerable result is mainly attributed to the biomimetic design and optimal physicochemical performance of the ISF-NGC. Specifically, the external conduit with adequate mechanical properties, optimized porosity and biodegradability bridges the proximal and distal nerve stumps [of severed nerves]. Meanwhile, the intraluminal sponge fillers with ECM-like topography create a favorable matrix for axonal regrowth and extension, further promoting nerve re-innervation across the gap. The synergistic effects of the external conduit and intraluminal matrix create a benign microenvironment for favoring nerve regeneration.”

The superior nerve repair effect that Wang alludes to was seen in a rat model. The sciatic nerve of healthy rats was severed with a 10 mm gap, and after being left a number of weeks to repair after ISF-NGC implantation, the extent of nerve regeneration and function was comparable to that seen in conventional autografting methods. Furthermore, when testing their NGC without the ISF, the researchers found nerve regeneration to be markedly poorer, pointing to the conclusion that the sponge-like filler played a critical role in favorable nerve regeneration.

The team hopes their research can broaden the therapeutic scope of treating traumatic nerve injuries, and hope to see their novel NGC being used in clinical applications one day. But hurdles remain.

“There are two broad challenges to overcome in the future,” said Wang “First, maximize the [directional cell movement] effect of the ISF-NGC in guiding axonal regeneration and furthermore, be capable of repairing much larger nerve defects. Second, minimize adverse foreign body response caused by biological, chemical, and topological mismatches between the ISF-NGC and the host nerve tissue.”

But he nevertheless remains optimistic and believes scientists can rise to this challenge.

“These findings showcase the huge possibility of ISF-NGCs for bridging peripheral nerve defects, and the application of ISF-NGC in the clinic may be quite convenient for doctors and offer great benefits to patients.”

Pluto's beating heart drives icy winds
Becky Smethurst: “My hobby is my job, with a bit of extra stress”
Universal donor lungs could shorten transplant waiting times
Citizen science: The future of research could be in the hands of many