Every day we use electronic devices: they are very important in our daily lives. Think of your mobile phone, television or your computer. Currently, the majority of the electronic devices are built on silicon: the essential semi-conducting material. However, researchers have been investigating alternative organic materials for the past two decades. Organic semiconductors offer new advantageous features compared to their inorganic counterparts: for example, organic-based materials can be integrated in flexible electronic platforms and can be manufactured by using non-conventional patterning methods, like printing tools. As a result, not only will the devices’ production costs decrease, but new applications in the field of healthcare, like wearable and implantable devices, will become possible. Viable and reproducible fabrication techniques together with strict control over device performances are two essential features for market applications, which are currently still challenging. 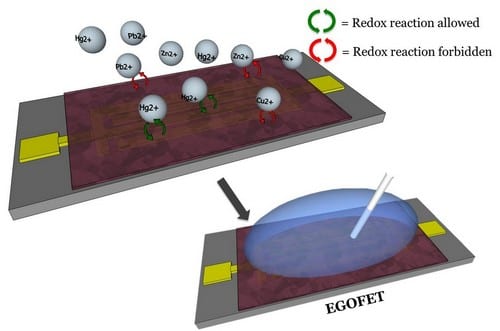 A positive shift of the threshold voltage is observed in the devices upon Hg2+ exposure.

Dr. Marta Mas-Torrent and her team are focusing on the fabrication of high-performance electrolyte-gated field-effect transistors (EGOFETs), electronic devices capable of working in an aqueous environment. As a consequence, these are promising candidate devices for sensing applications. In a recent publication in Advanced Functional Materials, this EGOFET architecture was exploited to monitor the doping effect of different heavy metal ions on a thin film of organic semiconductor deposited via a solution shearing technique compatible with roll-to-roll processes. A series of different heavy metal cations, HgCl2, ZnCl2, CuCl2, were used as dopants and placed in contact with the organic semiconductor thin film. The results demonstrated that this was due to a favourable energy match between the organic semiconductor and mercury ions. Moreover, the researchers found that only the highly toxic mercury ions can effectively interact with the thin film molecular structure and act as a dopant.

This is an exciting result, as the mechanism found by the researchers can be used in future sensor devices to find toxic mercury ions, for example in drinking water. Mercury is considered by the World Health Organisation (WHO) as one of the top ten chemicals of major public health concern.

This text was kindly provided by the authors.

The world's most efficient lithium-sulfur battery
3D printing the perfect piece of chocolate
Investing in clean energy research: How likely are we to phase out fossil fuels?
Compressed air cars for urban transportation