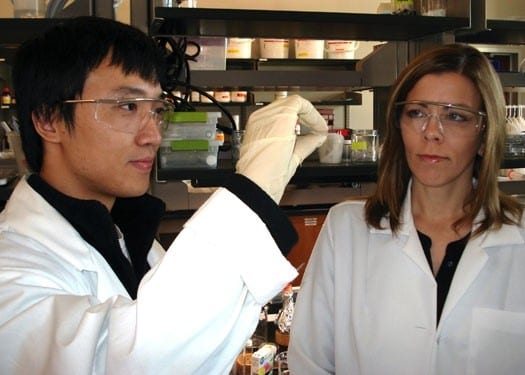 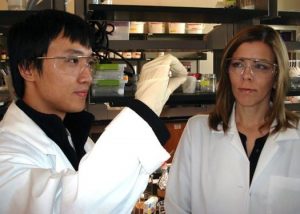 An implantable sensor that allows diabetics to more effectively monitor their blood-sugar levels is a step closer to reality, thanks to a researcher at Texas A&M University who is developing technology aimed at enabling these sensors to remain functional in the body for an extended period of time.

Dr. Melissa Grunlan, associate professor in the Department of Biomedical Engineering, is developing a “self-cleaning” membrane that envelops an implanted glucose sensor, shielding it from the body’s immune response that would otherwise render it nonfunctional.

Grunlan’s work is detailed in the scientific journal Soft Matter, and she has received a $1.5 million-grant from the National Institutes of Health to continue her research aimed at overcoming a significant obstacle in the development of an implantable glucose sensor known as “biofouling.”

Biofouling, she says, occurs when an implanted sensor is rendered nonfunctional because of the human body’s immune response that is triggered by a foreign object like a sensor.

Biofouling can make the sensor useless in days to a week, necessitating removal and implantation of new sensor at a rate that is not feasible, Grunlan adds. But Grunlan’s work could overcome this challenge and pave the way for a long-term, implanted glucose sensor that would provide marked improvement over the traditional finger-prick method used for decades.

While previous attempts at producing protective sensor membranes have focused on making the membrane surface less adhesive to cells, Grunlan has opted to create a “self-cleaning” membrane that periodically “shakes off” the cells by repeated contraction and re-expansion.

“Typically, physicians recommend that diabetic patients do a finger-prick test at least three times a day to measure their blood sugar levels, and many patients, particularly younger patients, don’t comply with this,” Grunlan says. “Even with multiple tests per day, this provides discontinuous and insufficient data. Given that blood-sugar levels can change significantly even within an hour, keeping track of blood sugars is currently a guessing game.

“This is not how blood sugars should be monitored. Individuals need to be continuously aware of blood sugars that are too high or too low so that they can take immediate steps to correct it. Otherwise, short-term and eventually long-term complications — with some being very serious and even fatal — can arise from poorly managed blood sugar levels.”

With that in mind, scientists hope to develop an implanted glucose-sensing device that would provide continuous measurement of blood sugar and even alert an individual to dangerously high or low levels. In order to do that, the biofouling issue must be resolved– and that’s where Grunlan’s technology comes in.

“Rather than attempt to produce a membrane that never allows these cells to attach to itself, we are accepting that fact that these cells and proteins are going to attach and begin to biofoul our sensor, and knowing this, we’re creating a membrane that can regularly clean itself when this happens and before glucose diffusion is compromised,” Grunlan says.

Made from a material called a hydrogel (the same general type of material from which contact lenses are made), Grunlan’s self-cleaning membrane is thermoresponsive, meaning it contracts and expands in response to changes in temperature

When the sensor is implanted, the membrane is swollen and expanded, allowing glucose to diffuse to the sensor, Grunlan explains. By increasing the temperature slightly above body temperature, the membrane rapidly contracts as it deswells with loss of water. When this occurs, proteins and cells are unable to withstand the dimensional change of the membrane, so they get dislodged from the surface, she adds. When the heat is removed, the membrane returns to its expanded state.

This heating/cooling process can be repeated until the membrane is cleaned, Grunlan says. Once back to its expanded state, the clean membrane can maintain sufficient glucose diffusion, allowing the sensor to function properly.

“The big-picture idea is to take our membrane and wrap it around a sensor,” Grunlan says. “The sensor would then be implanted in the subcutaneous tissue just below the wrist, possibly delivered with a needle. A person would wear a device that looks similar to a watch but in reality would be a glucose meter that reads the information from the implanted sensor and tells the person what his or her blood sugar levels are. The meter device also would periodically give off a slight degree of heat that would trigger the sensor’s membrane to self-clean.”

While early indications of the membrane’s effectiveness have been promising, further work on the membrane is under way, Grunlan notes. Because the sensor cannot function properly when the membrane is in a collapsed state, the entire cleaning process needs to occur quickly so that glucose measurements can resume, she says. Her goal, she says, is to create a membrane that initiates and completes successful self-cleaning in less than five minutes. In addition, Grunlan is working to create a more mechanically robust membrane that can withstand greater amounts of force that occur during implantation and removal of the device as well as forces from daily activities.

“An estimated 300 million people suffer from diabetes; it can lead to serious secondary health issues, and it ranks among the top five causes of death in the United States,” Grunlan notes. “Our membrane technology would allow implantable sensors to function inside the human body and provide continuous measurement so that diabetics can better adjust and maintain proper blood-sugar levels and reduce complications related to diabetes.”