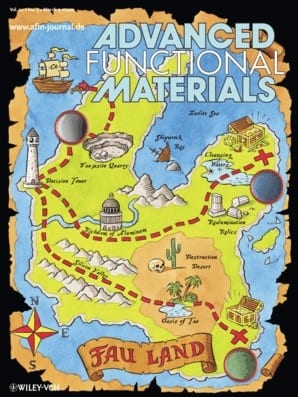 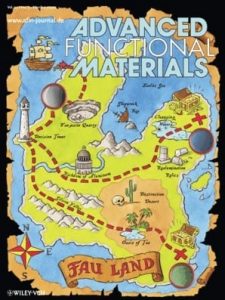 Zeolites have many important applications as catalysts in the chemical and oil industries and researchers are actively searching for methods by which to create hierarchical zeolites which have enhanced catalytic properties. Top-down approaches to synthesize hierarchical zeolites are advantageous because they are effective, scalable, and cost effective. Our latest Advanced Functional Materials cover documents the research “journey” taken by Javier Pérez-Ramírez and co-workers as they travel through Fau Land, using post-synthetic strategies to reach zeolite “treasures”, i.e., hierarchical Y and ultrastable Y (USY) zeolites with catalytic properties that are superior to those of their conventional counterparts.

The authors begin their voyage to the treasure with a commercially available pristine Y zeolite,  which is shown in the cover picture as being extracted from the the Faujasite Quarry. In the Decision Tower,  the path toward one of two treasures is chosen. Along the first path, a pristine Y zeolite that is rich in aluminum travels through the the Richdom of Aluminum. Alkaline treatment then creates aluminum-rich debris, the so-called Realumination Relics, which can be removed by the Cleaning Waters. The result? Arrival at the first treasure: a mesoporous Y zeolite with high aluminum content.

En route to a second treasure, a pathway through the Silicon Valley is chosen. The zeolite is subjected to traditional steaming and acid leaching processes that reduce the aluminum content. The resulting material is hydrothermally stable, but structurally unstable. The cover depicts this state as the Destruction Desert, which much be crossed to reach the treasure. By using the Oasis of Taa (treatment with tetraalkylaluminum), which maintains the zeolite properites and introduces mesoporous qualities, the authors cross the desert and arrive at the second treasure: a mesoporous USY zeolite with relatively low aluminum content.

The optimization of the post-synthetic treatments of the zeolites to reach the zeolite “treasures” demonstrates that a wide variety of hierarchical zeolites can be prepared by careful choice of the treatments and their sequences. This very creative cover design does an excellent job of describing the research paths taken to synthesize these “treasured” materials.