Scientists have constrained the mass of neutrinos to less than 1 eV for the first time, breaking an important barrier in neutrino physics. 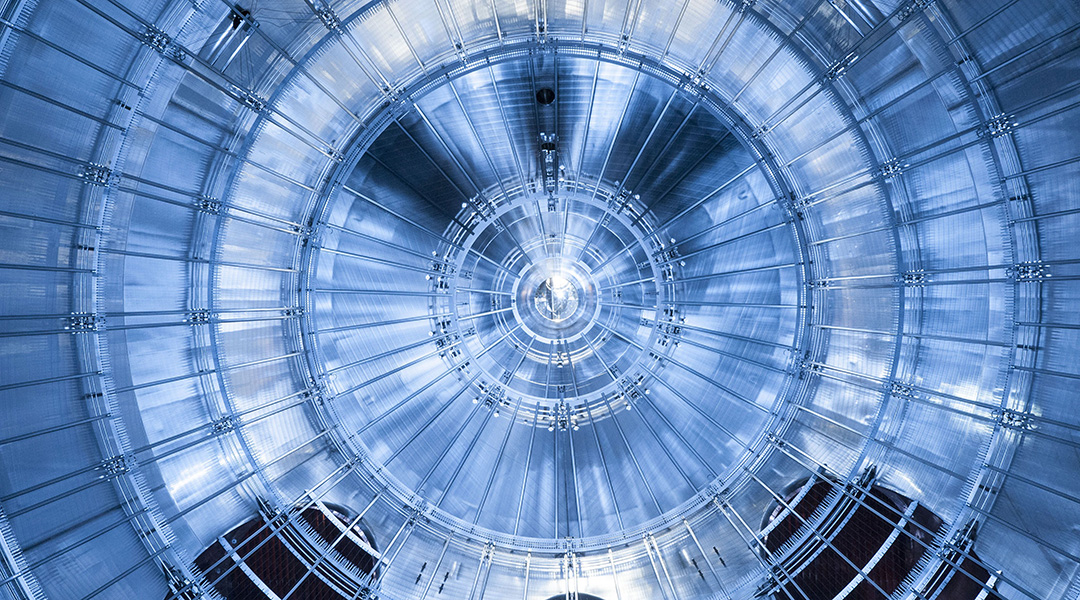 Physicists participating in the international Karlsruhe Tritium Neutrino (KATRIN) experiment have just measured the mass of a neutrino with a record-breaking accuracy.

Among all known subatomic particles with non-zero masses, neutrinos are the lightest with a mass around ten million times less than that of an electron. Neutrinos are abundant in the universe and, despite their small size, play an important role in the evolution of large-scale structures in it, such as galaxy formation.

A direct laboratory measurement of the neutrino mass would have far-reaching implications in both elementary particle physics and cosmology.

The role of neutrinos in physics

In the Standard Model of particle physics, neutrinos are considered massless, but this non-zero mass challenges our current understanding and hints at a concept called “new physics” — physics beyond the Standard Model that could help clarify some of its discrepancies.

All massive fundamental particles that we know of — from electrons with mass of half of a megaelectron volt (MeV) to 170 GeV t-quarks — obtain their masses through interactions with the Higgs boson. A neutrino’s mass is at least six orders of magnitude smaller than the mass of any other particle we have discovered, and such a huge gap hints that a different mass creation mechanism may be at play. Gaining a more precise measurement of the neutrino mass could therefore help shed light on the origin of particle masses.

Neutrinos are difficult to study because their interactions with other particles are very weak — a single neutrino moving at nearly the speed of light will need a one hundred light year–thick layer of water to get scattered (and therefore detected). As a result, their mass is usually measured indirectly by studying the velocity distribution of other particles participating in certain interaction or decay processes.

This is exactly how physicists from the KATRIN collaboration put new constraints on the neutrino mass. They studied the beta decay of an unstable hydrogen isotope called tritium with a short half-life of 12.3 years, which releases an electron and a neutrino among its decay products.

Using a high-precision spectrometer, the scientists measured the velocities of almost four million electrons, and from this distribution — whose precise shape encodes the neutrino mass — determined the upper limit of its value, which appeared to be smaller than 0.9 eV.

This is the first time in history that a sub-eV sensitivity in the experiments of this type has been achieved. The previous upper limit on this mass was equal to 1.1 eV and was set by the same KATRIN collaboration in 2019. In this second run, the results of which are presented in a recent paper published in Nature Physics, the team managed to significantly increase the experiment’s sensitivity.

They did this by first improving the vacuum conditions in the spectrometer, which resulted in a background noise reduction of 25%, and by increasing the tritium source activity (or the rate at which particles are generated) by a factor of 3.8. By combining these results, the KATRIN scientists were able to reduce the upper limit on the neutrino mass to 0.8 eV.

While exciting, the experiment is not over yet. The team hope to increase the total statistics of signal events by a factor of 50 during the coming 1000 days. A planned optimization of the electromagnetic field design of the spectrometer will reduce the background by another factor of two.

These and other improvements in the experimental apparatus, together with cosmological probes of the neutrino mass, are expected to allow researchers to reach the sensitivity of approximately 0.2 eV, and to explore physics beyond the Standard Model.