How did the results at CERN get so badly misrepresented? 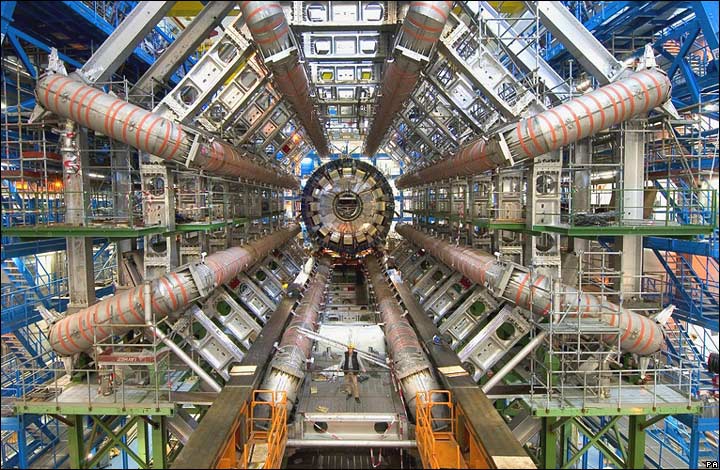 I found myself the other evening watching a science communicator give a chemistry lecture on YouTube. He was speaking at the Royal Institution, an august body, with a history that stretches back more than 200 years in the scientific community.

“Excellent”, I thought to myself (unironically), “this is my bag” (also, quite unironically). I was carried along through the opening stanza by the man’s lyrical English accent and passion for the subject. At around the 10 minute mark he told the audience that he would “use musical energy” to “form a new substance”.

He mixed two liquids together, lofted his violin and began to play, “in D minor”. A few short seconds later the solution turned a dark blue. The audience gasped as he assured them that the notes he had played, had given the molecules in the solution enough energy to form this new material.

Which is a bald-faced lie.

The reaction is called a clock reaction, and the solution would have turned navy blue whether he was playing a tuba, a piano or simply standing on his head.

My first instinct was to search the comments in rage to confirm that the rest of the world was as upset as I was. But it wasn’t. I was perplexed, flumoxed… dumfounded. How could such an obvious mistruth be told at the very desk that Faraday demonstrated electromagnetic induction?

On July 4th 2012, a massive team of scientists confirmed that they had detected evidence of the Higgs field. The details of the experiments used to detect the field are fascinating, and are well covered here, and here.

The reporting of this event has long been a source of irritation among some groups of scientists. It was termed the “God particle” and hailed as the particle which gave all matter its mass. One of these phrases is obvious click-bait, the other is demonstrably false. The Higgs field is directly responsible for around 1% of the mass of your body.

When newsrooms around my home country, Australia, began the task of reporting CERN’s findings to the general public, a group whose science education finished at high school, found themselves broadcasting to a similarly educated general public. If the reporting of this event was so inaccurate, then perhaps some clues as to why, can be found in science education offered at this level.

This theory is relatively easy to grasp. As a teenager I could imagine a particle, I’d been to the beach, I knew what grains of sand looked like. I could imagine electrostatic forces, I’d seen magnets work.

This particular answer to the question “What are we made of?” is called “Bohr’s model”. It was at the cutting edge of particle physics until the 1920s, when it was supplanted by Schrödinger’s model, which in turn was regularly updated throughout the century.

The news from CERN delivered an update from the cutting edge of particle physics to a public whose frame of reference was lodged firmly in the 1920s. In this context, it’s a wonder that any meaningful information was conveyed at all. Imagine for a moment that in 1920 you signed up for the world’s most unethical experiment. You and a stranger would be cryogenically frozen for 100 years. On waking, you would be allowed to read four lines from page 5 of the New York Times, and then summarize the state of the world to your newly awoken co-subject.

“So what, pray tell, has befallen the globe?” she might reasonably ask.

To understand either the meaning of “Boris Johnson” or “Twitter”, a working knowledge of the history of 20th century politics and technology is required. To understand the meaning of the Higgs Field, some familiarity with 20th century particle physics is just as crucial. During this period various different models for describing the universe competed for supremacy. One of these theories suggested that the particles and forces we perceive are actually fluctuations and perturbations in infinitely large fields. This theory came to be known as “The Standard Model”.

Fields are certainly a less intuitive concept than particles, but metaphors are not impossible to come by. It is possible to think of our atmosphere as a field. This field is made of air, and extends from the surface of the earth to the exosphere. At every point in this field, the air has a particular pressure, and this pressure is constantly in flux.

To this point, the analogy is fairly easy to grasp. The air is a field… check. But, if the air was an elementary field, like those predicted by The Standard Model, its basic building block would not be molecules of air, the basic building block would be the field itself. The things that we perceive as molecules of air, would in this imperfect analogy, actually be small packets of bunched-up air-field.

While this idea had broad support in the particle physics community thanks to Dirac’s work, the math that described this model, made some predictions that were obviously false. One such problem had to do with the predictions it made about the fundamental forces in nature.

The number of elementary particle fields recognized by the standard model has changed over the course of the last 100 years as new fields were discovered, but the four forces involved have remained constant; gravity, electromagnetism, the strong nuclear force, and the weak nuclear force. Two of which are immediately familiar.

Part of the reason that it is so easy to recognize gravity and electromagnetism is that the agents that carry them are weightless, and therefore can travel over large distances. This idea of a force carrier might seem a little odd at first, but there is a quite commonplace example. The force of electromagnetism is carried by light. Right now, light is transmitting electromagnetic data from this screen to electromagnetically sensitive receptors in your eyes.

The strong nuclear force and the weak nuclear force are different. They only operate over short distances. This was a massive problem for the model. According to the math that described these forces, the strong and weak nuclear forces should have also been able to exert their influence over large distances. In the early 1960s a group of grad students and post-docs were wrestling with this contradiction, and they developed a radical, purely hypothetical way to reconcile it.

Their theories predicted two different mechanisms. The first related to the strong nuclear force, a force that is carried by “gluons”. Gluons, like photons, are massless, but unlike photons, they are easily trapped, not moving beyond the confines of, for example, a proton. This theory is called “confinement” and strong experimental evidence for it was found in 1974.

The second mechanism was a good deal weirder. The students simply invented a field, that over time began to be called the “Higgs field”. This never observed field was predicted to pervade the entire universe.

The weak nuclear force is carried by entities called Z and W bosons. The students predicted that the interactions of these bosons with their hypothetical field, would give these bosons mass, explaining their limited range. Using mathematical models, they were able to describe the proposed field in great detail. These models predicted that the Higgs field would actually be observable under certain conditions. Those conditions turned out to be far beyond what experimental physicists at the time could create.

And so in Europe, nine billion dollars was spent to build a machine—the Large Hadron Collider (LHC)—that could create these conditions. Nine billion was spent, because if this hypothetical field existed, it would confirm that The Standard Model was an internally consistent, logical model for the universe. It would confirm, among other things, that our star, our planet, and our bodies are not built from particles, but from a number of distinct, mathematically describable fields.

And the thing is, it did exist. It turns out that the standard model is such a powerful description of the universe that it could predict the existence of a building block of nature using nothing but its own logic.

Another Brick in The Wall

The violinist at the Royal Institution meant well, I’m sure. After performing his miraculous feat, he explained to the audience that the vibrations in the air caused by his playing had given the molecules involved enough energy to react.

This is a pretty decent metaphor for “activation energy”, a useful concept in chemistry. In many many cases, a small amount of energy, or a spark, is enough to kick off a much bigger reaction. TNT explosions work just like this. A color change is a nice, safe way to clearly demonstrate this concept to a lay audience.

Does it really matter that some of the details are untrue?

I am sure that generations of high school teachers meant well, teaching Bohr’s model of fundamental particles to students. It’s not a lie, it’s more of an oversimplification. It’s a decent approximation of the way the atom works. As a model of the universe, it is not too difficult to grasp, and it certainly could act as a gateway to a deeper understanding of the fundamental particles that make up the world.

But surely one of the goals of the education of a human, should be to help them answer the most simple questions that we know to ask; where do I come from? What am I made of? How does the world work?

In 2012, a revolutionary insight was offered into one of those very simple questions, and the vast majority of people had never been equipped with the basic knowledge required to understand the answer. A science education system that produces that kind of result, should be treated with the kind of skepticism normally reserved for chemical reactions catalyzed in D minor.

I am not a physicist by training, and so am heavily indebted to public lectures given by Sean Carol and David Tong for helping me grasp some of the history and metaphors that describe the Standard Model. Huge thanks too, to Daniel Wells for proofing the physics, and helping me understand where I had misunderstood the science.