Engineers and oncologists teamed up to develop a microfluidic chip capable of capturing the body’s natural killer immune cells to harvest their cancer-killing exosomes. 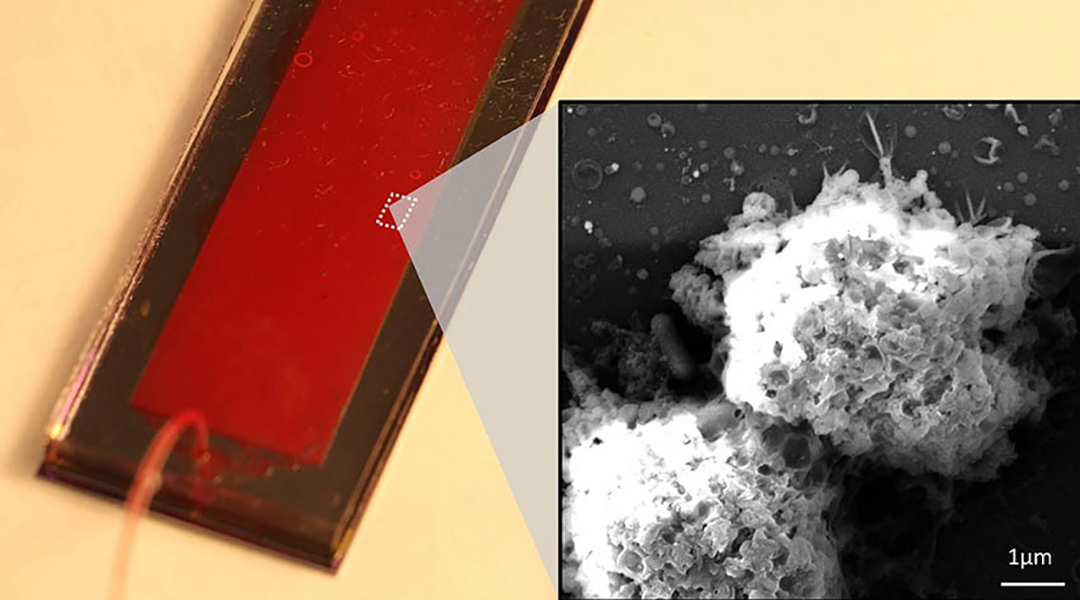 Two large natural killer immune cells are surrounded by their much smaller exosomes on the NK-GO microfluidic chip developed at the University of Michigan.

Building on the promise of emerging therapies to deploy the body’s “natural killer” immune cells to fight cancer, researchers at the University of Michigan have gone one step further. They’ve developed what is believed to be the first systematic way to catch natural killer cells and get them to release cancer-killing packets called exosomes. These nano-scale exosomes are thousands of times smaller than natural killer cells — or NK cells for short — and thus better able to penetrate cancer cells’ defenses.

A proof-of-concept study in blood samples from five patients with non-small cell lung cancer demonstrated that the approach was able to capture natural killer cells on a microfluidic chip and use them to “farm” the NK exosomes.

The multidisciplinary team, which included U-M engineers and oncologists, further demonstrated that the exosomes could effectively kill circulating tumor cells in cell cultures, according to findings published in Advanced Science.

“Exosomes are small sacs of proteins and other molecules that are naturally released by almost every type of cell in the body,” says Yoon-Tae Kang, Ph.D., a research fellow in chemical engineering and co-lead author of the study. “In this case, we wanted to expand our understanding of NK exosomes and try to harness their cancer-killing potential.”

Compared to NK cells, NK exosomes are more stable and easier to modify for therapeutic purposes, he says. The system also has potential to help diagnose and monitor cancer, the study notes.

Harnessing the power of NK cells has long presented a tantalizing possibility for researchers. Unlike T cells, NK cells don’t have to be primed by invader-specific antigens in order to fight off intruders.

“One major bottleneck of NK cell-based therapies, however, is that after the injection of the NK cells into patients, they’re not good at infiltrating into the tumor microenvironment,” says co-lead author Zeqi Niu, a doctoral student in chemical engineering. “The NK cell-derived exosomes contain the same cancer-killing molecules but they’re much, much smaller and better able to penetrate into the tumors.”

While a small number of previous studies had examined NK exosomes’ ability to kill cancer cells, there hadn’t been a systematic approach to capturing patient-derived NK cells and using them to generate NK exosomes, adds co-senior study author, Sunitha Nagrath, an associate professor of chemical engineering at U-M and member of the Rogel Cancer Center.

“The advantage of exosomes is that they’re organic, native to your body,” she says. “We didn’t have to fabricate them. The beauty of the approach is being able to capture the NK cells on a microfluidic chip, incubate them on the chip for a short period of time and then collect the exosomes that are released by the cells. Otherwise, trying to isolate exosomes directly from the blood would be like looking for tiny pebbles in a room packed full of stuff.”

The NK exosome harvesting system combines three technologies. First, the researchers captured the NK cells on a graphene oxide microfluidic chip developed at U-M. Then the cells are incubated, prompting them to release exosomes. The exosomes are captured by tiny magnetic beads, called ExoBeads, which are coated with exosome-specific antibodies; the beads are removed from the chip and the NK exosomes are separated from them using a different process. Simultaneously, the team used a liquid biopsy system called Labyrinth, which was also developed at U-M, to isolate circulating tumor cells from patient blood samples to evaluate correlations between NK cells and exosomes, and circulating tumor cells.

Additional experiments showed that NK exosomes derived from patient samples were indeed able to kill circulating tumor cells in cell cultures. “The advantage of exosomes is that they’re organic, native to your body. We didn’t have to fabricate them,” said Nagrath.

A circulating tumor cell is one that has broken away from a primary tumor and begun traveling through the bloodstream. These can then seed new cancers elsewhere in the body through a process known as metastasis.

“When we first started on this research, we weren’t sure if we were going to be able to generate and harvest the NK exosomes using a chip and ExoBeads,” Nagrath says. “Or if we’d be able to collect them efficiently enough for potential therapeutic use. The NK cell capture process, the process of separating the NK exosomes from the beads, creating an assay to evaluate the exosomes’ ability to kill cancer cells — there were many components that had to be optimized for this approach to be a success, and each one presented its own challenges.”

Exosomes also have good potential to be further engineered and optimized to be more potent and efficient against cancer cells, the researchers note.

Additional validation and work will be needed to develop the technology toward potential future clinical use, Kang says.

The number of patient samples included in the study was limited by the exigencies of the COVID-19 pandemic, which resulted in temporary laboratory closures across the U-M campus. The researchers plan to continue the work with a larger number of patient samples. They’re also working with collaborators to test the efficacy of the exosomes against tumors in vivo — in mouse models of cancer.

Additional work is being done on the use of the technology to capture immune cells from the blood to provide doctors with additional information about a patient’s cancer. This would be different from most liquid biopsy technology, which focuses on capturing and evaluating the circulating tumor cells.

The researchers also stressed the centrality of the collaboration between physicians and engineers in moving the research forward.

“Immunotherapy approaches that target immune checkpoints have revolutionized cancer therapy for several cancers. However, only a small minority of patients exhibit a durable clinical benefit and cure,” says co-senior author Nithya Ramnath, MBBS, an oncologist and professor of internal medicine at Michigan Medicine.

“Preliminary studies with NK cells either by themselves or in combination with immune checkpoint inhibitors have, however, have shown only modest results. NK-derived exosomes, on the other hand, are able to home into tumors more effectively. The current paper represents a technological advance in the ability to harvest not only NK cells, but also NK derived exosomes that could help inform future immunotherapeutic approaches.”

Adapted from original press release provided by the University of Michigan