Researchers have developed three-dimensional printing technology and techniques to create free-standing structures made of liquid metal at room temperature. 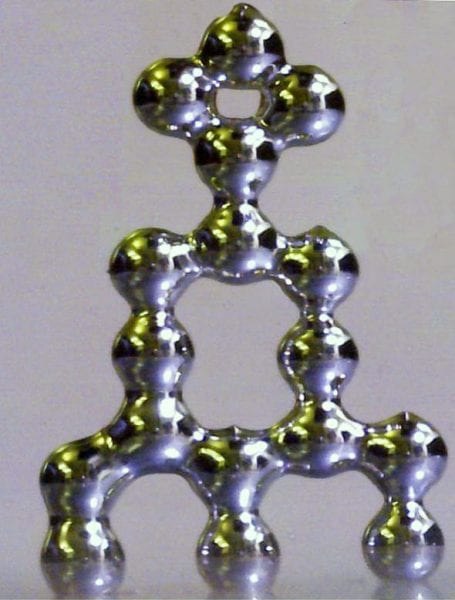 The paper this article covers is free to access until the 9th of August 2013.

“It’s difficult to create structures out of liquids, because liquids want to bead up. But we’ve found that a liquid metal alloy of gallium and indium reacts to the oxygen in the air at room temperature to form a ‘skin’ that allows the liquid metal structures to retain their shapes,” says Dr. Michael Dickey, an assistant professor of chemical and biomolecular engineering at NC State and co-author of a paper describing the work.

The researchers developed multiple techniques for creating these structures, which can be used to connect electronic components in three dimensions. White it is relatively straightforward to pattern the metal “in plane” – meaning all on the same level – these liquid metal structures can also form shapes that reach up or down.

One technique involves stacking droplets of liquid metal on top of each other, much like a stack of oranges at the supermarket. The droplets adhere to one another, but retain their shape – they do not merge into a single, larger droplet. Video of the process is available here.

Another technique injects liquid metal into a polymer template, so that the metal takes on a specific shape. The template is then dissolved, leaving the bare, liquid metal in the desired shape. The researchers also developed techniques for creating liquid metal wires, which retain their shape even when held perpendicular to the substrate.

Dickey’s team is currently exploring how to further develop these techniques, as well as how to use them in various electronics applications and in conjunction with established 3-D printing technologies.

“I’d also like to note that the work by an undergraduate, Collin Ladd, was indispensable to this project,” Dickey says. “He helped develop the concept, and literally created some of this technology out of spare parts he found himself.”