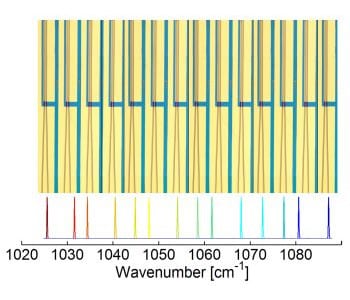 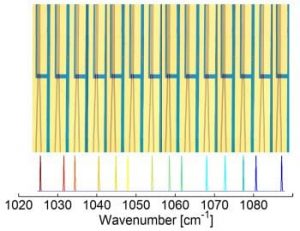 While conventional interband semiconductor lasers emit electromagnetic radiation due to the recombination of electrons and holes across the band gap of the material, laser emission in quantum cascade lasers (QCLs) is based on only one type of carrier and intersubband transitions in a repeated stack of semiconductor multiple quantum well heterostructures. Since the first demonstration in 1994 of such a unipolar semiconductor laser using an AlInAs/GaInAs heterostructure, QCLs have been attracting research interest from both applied and basic research communities. Steady progress has expanded the wavelength range accessible by QCLs, now extending from below 3 μm over the long-wavelength mid-infrared to the far-infrared and terahertz (THz) regime.

Multi-wavelength quantum cascade laser arrays in the mid-infrared are of special interest as they are a powerful, robust and versatile source for next-generation spectroscopy and stand-off detection systems. In a review article published in Laser & Photonics Reviews, Federico Capasso (Harvard University, USA) and Patrick Rauter (Harvard University and Johannes Kepler University Linz, Austria) give an overview of recent progress in the development of multi-wavelength QCL arrays as novel sources of tunable, coherent, monochromatic radiation.

The authors discuss various approaches for the array elements, from conventional distributed-feedback lasers over master-oscillator power-amplifier devices to tapered oscillators. The variety of possible applications is illustrated based on some selected publications on spectroscopy and sensing demonstrations. Another topic are external cavity (EC) systems as a common, commercially available solution for QCL tuning. Moreover, the challenges associated with reliably achieving single-mode operation at deterministic wavelengths for each laser element in combination with a uniform distribution of high output power across the array are discussed. Spectroscopy and hyperspectral imaging demonstrations by quantum cascade laser arrays are reviewed.

The authors conclude: “Spectroscopy and detection systems based on multiwavelength QCL arrays as tunable mid-infrared sources have tremendous potential to outperform conventional systems like EC QCL-based platforms or FTIRs in a variety of fields and to open up new applications calling for fast, compact and mechanically robust solutions with high customizability.”