Professor Seemann and his colleagues discovered how bilayers made purely from hydrophobins were created using a microfluidic technique. 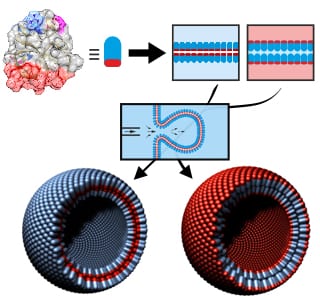 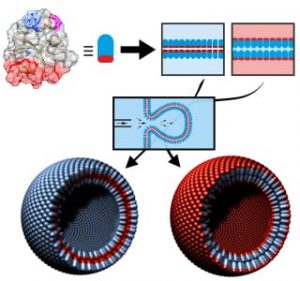 In biology the compartmentalization of an aqueous solution by semi-permeable membranes is of the utmost importance as it enables encapsulation of molecules and ions, thus inhibiting their diffusion. Typically, phospholipids forming a bilayer are the building blocks of these membranes, with their amphiphilic character being a necessary precondition for bilayer formation. Proteins embedded into such a lipid bilayer allow and control the transport of substances through this membrane.

Since phospholipids are limited in their variety in mechanical and biochemical properties, alternative building blocks are sought for applications, e.g., in drug delivery or synthetic biology. Proteins seem to be ideal candidates, promising bio-compatibility and versatility via genetic engineering. A special type of amphiphilic and water-soluble proteins, hydrophobins, appears to be particularly suited. These proteins occur naturally in filamentous fungi, being involved in processes such as sporulation or adhesion. They are already envisaged for usage, e.g., in the food industry for emulsion purposes or in biotechnology for coating implants to improve their acceptance by human bodies.

Professor Seemann and his colleagues discovered how bilayers made purely from hydrophobins were created using a microfluidic technique. They demonstrated that these proteins possess the exceptional property of being able to form stable bilayers between any type of ﬂuid compartments, be it gas, water, or oil. This ability renders hydrophobins much more versatile than lipids. Via microfluidic jetting, hydrophobin vesicles were formed from these different types of bilayers. This allows for encapsulation in different media using the same membrane material. In the case of the hydrophobin vesicles in aqueous surroundings, gramicidin-A ion channels could be inserted into the bilayer allowing the transport of monovalent ions.  Thus, these vesicles are the first example of vesicles with lipid-free, artificial bilayers containing inserted functional proteins. These possibilities render hydrophobin vesicles a superior future platform for applications in synthetic biology and might facilitate new possibilities for drug delivery.