A new hybrid nanoarchitecture has been developed to allow the use of protein toxins such as ricin in cancer treatment. 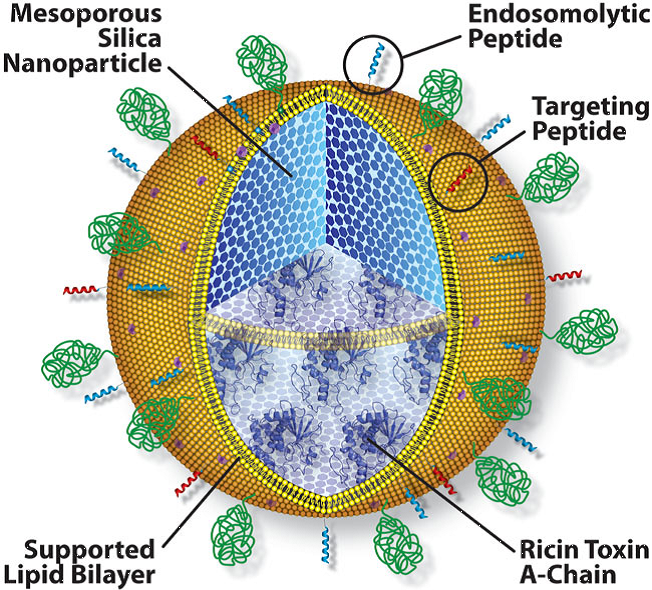 Imagine it would be possible to transport drugs by a shuttle which would be drawn to the desired destination as if by magic on an invisible thread. Upon arrival, a gate is opened by a specific key and the vehicle can get rid of its precious cargo. This kind of targeted drug delivery would enable controlled and specific enrichment of a therapeutic agent in the tissue or organ where it is actually needed and side effects could be reduced.

In traditional drug delivery approaches, only a small amount of the drug reaches the part of the body where it is actually required. It is therefore of the utmost importance to better predict and influence the degree of specificity in targeted drug delivery concepts.

The clinical use of protein toxins like Ricin toxin as anti-cancer agents is often hindered by their immunogenicity which leads to a dosage restriction and represents a significant drawback for their clinical utility. To exploit the valuable features of this class of therapeutic agents, smart and innovative hybrid architectures have to be designed which elegantly circumvent these limitations and fulfill the requirements expected of modern therapeutic agents.

Researchers from the University of New Mexico and from the Sandia National Laboratories present a highly complex system as a versatile delivery platform that may enable protein toxin-based therapies to reach their full potential. The so-called “Protocell” combines a mesoporous silica core loaded with the toxic RTA (Ricin toxin A) with the features of liposomes. The particle core is coated with a lipid bilayer further modified with a targeting peptid for specific delivery, and an endosomolytical peptide for intracellular release.

RTA-loaded protocells show a 500-fold higher capacity for RTA than conventionally loaded liposomes and are stable under neutral pH conditions, unlike the uncoated loaded silica particles or the liposomes which rapidly lose their encapsulated RTA under neutral pH conditions. However, under a slightly acidic pH which reflects the physiological conditions in the endosomal orlysosomal pathway, the total amount of cargo is released within 24 hours.

Due to the coexistence of the endosomolytical and the targeting peptide, only the receptor-positive cells are specifically addressed and killed whereas the viability of other cells is maintained.

Thus, in terms of capacity, stability, and triggered release, these kinds of protocells represent a substantial improvement over conventionally produced liposomes and have the potential to address many limitations of state-of-the-art toxin-based therapies.