New technology combines a laser and electric fields to separate particles and microbes by size. 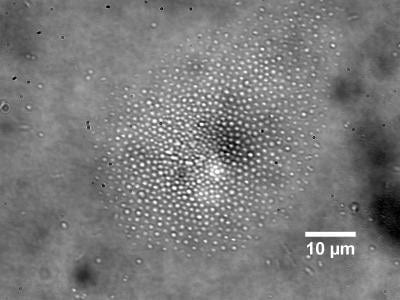 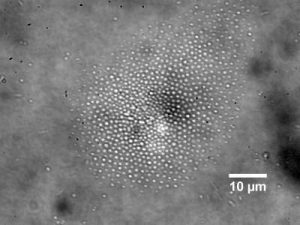 Researchers have demonstrated a new technology that combines a laser and electric fields to create tiny centrifuge-like whirlpools to separate particles and microbes by size, a potential lab-on-a-chip system for medicine and research.

The theory behind the technology, called rapid electrokinetic patterning – or REP – has been described in technical papers published between 2008 and 2011. Now the researchers have used the method for the first time to collect microscopic bacteria and fungi, said Steven T. Wereley, a Purdue University professor of mechanical engineering.

“The new results demonstrate that REP can be used to sort biological particles but also that the technique is a powerful tool for development of a high-performance on-chip bioassay system,” Wereley said.

The technology works by using a highly focused infrared laser to heat a fluid in a microchannel containing particles or bacteria. An electric field is applied, combining with the laser’s heating action to circulate the fluid in a “microfluidic vortex,” whirling mini-maelstroms one-tenth the width of a human hair that work like a centrifuge to isolate specific types of particles based on size.

Particles of different sizes can be isolated by changing the electrical frequency, and the vortex moves wherever the laser is pointed, representing a method for positioning specific types of particles for detection and analysis.

The paper was written by Kwon; Ravindranath; Aloke Kumar, a researcher at the Oak Ridge National Laboratory; Joseph Irudayaraj, a Purdue professor of agricultural and biological engineering and deputy director of the Bindley Bioscience Center; and Wereley.

Much of the research has been based at the Birck Nanotechnology Center at Purdue’s Discovery Park, in collaboration with Irudayaraj’s group in the Bindley Bioscience Center.

“By properly choosing the electrical frequency we can separate blood components, such as platelets,” Wereley said. “Say you want to collect Shewanella bacteria, so you use a certain electrical frequency and collect them. Then the next day you want to collect platelets from blood. That’s going to be a different frequency. We foresee the ability to dynamically select what you will collect, which you could not do that with conventional tools.”

The overall research field is called “optoelectrical microfluidics.” More research is needed before the technology is ready for commercialization.

“It won’t be on the market in a year,” Wereley said. “We are still in the research end of this. We are sort of at the stage of looking for the killer app for this technology.”

REP may be used as a tool for nanomanufacturing because it shows promise for the assembly of suspended particles, called colloids. The ability to construct objects with colloids makes it possible to create structures with particular mechanical and thermal characteristics to manufacture electronic devices and tiny mechanical parts.

Purdue researchers are pursuing the technology for pharmaceutical manufacturing, Wereley said, because a number of drugs are manufactured from solid particles suspended in liquid. The particles have to be collected and separated from the liquid. This process is now done using filters and centrifuges.

REP also might be used to diagnose the presence of viruses, as well, although it has not yet been used to separate viruses from a sample, Wereley said.

Mystery solved: The origin of the colors in the first color photographs
An artificial embryologist to improve the success of IVF
Monitoring intra-abdominal pressure with new radar system
Gentle laser processing of perovskites at the nanoscale