Microrobots offer huge potential in medicine, particularly in the field of drug delivery. 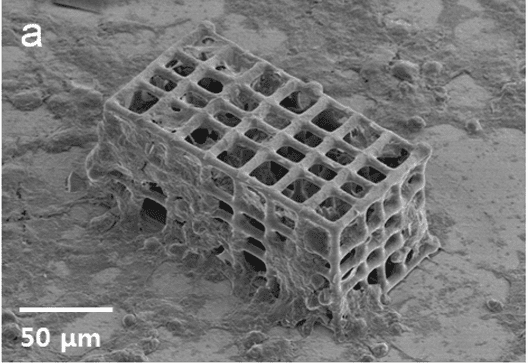 Microrobots offer huge potential in medicine, particularly in the field of drug delivery.  Various different types of microrobot and methods of drug transport have previously been previously reported, but problems such as poor loading capacity and propulsion efficiency are often encountered. Now, Kim and colleagues present a new type of microrobot with potential to be used a transport system for targeted therapy. 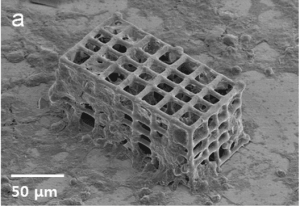 The authors used laser lithography to construct porous 3D scaffolds. Developing the scaffolds in this way allowed excellent control of the size of the pores, and the resulting microrobots hold numerous advantages over structures with more random porosity. These scaffolds were then coated in a thin layer of nickel and titanium: the nickel allows manipulation of the microrobot using an external magnetic field, while the titanium increases the biocompatibility of the structure, reducing its cytotoxicity.

Human embryonic kidney cells were cultured on the inside of the microrobots. After 96 hours, the structures were analysed using scanning electron microscopy, and it was found that the cultured cells had successfully interacted with and adhered to the 3D support, meaning that moving the microrobot would also move the cells. Moreover, as determined by the extent of the cell proliferation over the structures, it was confirmed that the microrobots were not toxic to the cells, meaning these particular robots have the potential to be safe to use in real-life scenarios.

Of course, much work remains to be done in the field of microrobotic therapeutics. But studies such as this present a real stepping stone in paving the way to new form of medicine that has the potential to reduce the risk of complications arising from more invasive treatment methods.