Pd nanosheets function both as broadband light absorbers and as synthetic catalysts for the dehydrogenation of formic acid to hydrogen and oxygen. 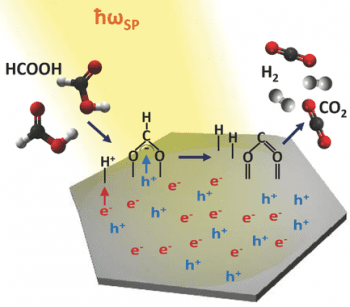 Life on earth is ultimately sustained by photosynthesis, the process that converts CO2 and water to carbohydrates using the radiant energy of the sun. Despite its central importance, natural photosynthesis is rather inefficient; moreover no commercial process has yet been developed whereby sunlight is used to convert simple molecules to valuable chemical compounds – a process that is referred to as “artificial photosynthesis”.

In their recent paper, published in Advanced Optical Materials, Professor Martin Moskovits (University of California) and collaborators take a step in that direction by pointing out that by producing palladium nanoparticles each shaped like a submicroscopic hexagon, a material is created that is able to carry out multiple duties. First, on account of its shape, the particle can absorb sunlight across its entire visible spectrum; second, the palladium nanoparticle converts the absorbed solar energy into highly energetic electrons that react with molecules that reside on the surface of the palladium nano-hexagons catalytically converting them into a desirable product. In essence, the Pd nanoparticle acts as a one-stop photochemical shop that absorbs sunlight, then uses its energy to carry out chemistry for which the Pd also serves as catalyst. They illustrate this process by greatly speeding up the catalytic decomposition of formic acid to hydrogen and CO2, a process that is very sluggish at room temperature, but is accelerated by approximately 500% when carried out under the simulated light of the sun in the presence of the aforementioned palladium nanohexagonal sheets.