Non‐thermal plasma (NTP), rich in active species, charged and energetic particles, and UV radiation, can achieve short treatment times and can be efficient in certain applications, such as sterilization, wound repair, and tumor treatment.

A group of scientists from the Xi’an Jiaotong University in China have researched how non-thermal plasma that could be used in treating pancreatic tumors. 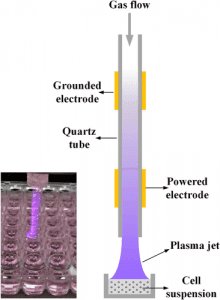 APPJ device and its electrode configuration.

Pancreatic tumors are malignant tumors of the gastrointestinal tract which are difficult to diagnose and treat. At present, the principle of treatment in clinic for pancreatic tumors is still based on surgery, combined with radio‐ and chemo‐therapy.

However, pancreatic tumors have low sensitivity to radiotherapy. Chemotherapy is mainly used to reduce the chance of recurrence after surgery and both have serious side effects, which seriously damage the functions of normal cells and organs.

Up to now, only a few studies considered the combination of plasma and another method, such as nanoparticles or pulsed electric fields. With this, the current research basically only focusses on the plasma treatment alone and ignores the role of traditional clinic drugs.

The results reveal that they have a synergistic effect on inhibiting the proliferation of tumor cells when the plasma is applied before the drug, but the antagonism between drug and plasma meets in the other case.

“The results are hopeful to promote the application of the plasma combined with the drugs in clinic therapy for cancer”, according to team member Zhengshi Chang.