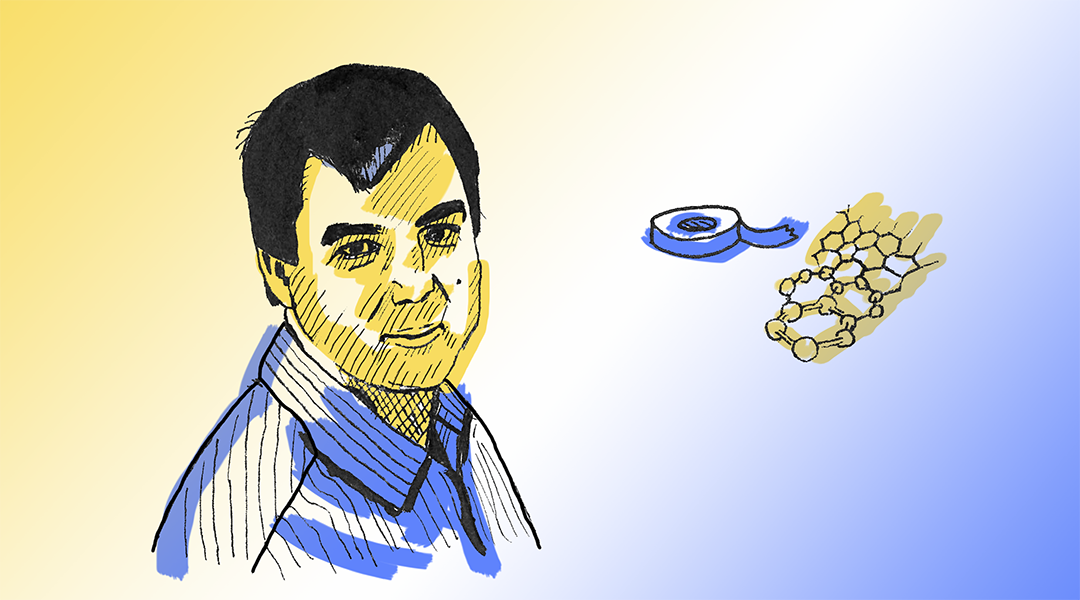 Graphene—an allotrope of carbon—has been known for quite some time, but this simple yet wonderful material gained relatively little attention until a ground-breaking paper published in 2004 demonstrated a surprisingly simple technique to extract an atomically thin graphene film from graphite.

That technique, known as the “Scotch tape method”, was developed at The University of Manchester by physicists Professor Sir Konstantin “Kostya” Novoselov and Professor Sir Andre Greim.

Interest in graphene has since exploded, with much buzz around the humble material’s potential in electronics and materials science.

In recognition of their work, Novoselov and Greim were awarded the Nobel Prize in Physics in 2010.

Today, which marks Kostya’s birthday, Advanced Science News celebrates him as a Pioneer in Science.

Kostya was born in 1974 in Nizhny Tagil, Russia, a city close to the virtual border between Europe and Asia. He later studied at the Moscow Institute of Physics and Technology—an institution that already boasted five Nobel Laureates amongst its alumni.

But it wasn’t until his move to the Netherlands that he followed a path that would ultimately lead to what could perhaps become one of the biggest breakthroughs of this century. Here, as a Ph.D. student at Radboud University of Nijmegen, he began his close collaboration with his supervisor, Andre Greim.

Indeed, it was his work undertaken as a Ph.D. student, published in the esteemed journal Science, that was cited as the reason for being awarded with his supervisor the Nobel Prize six years later.

Things only took off from there, with a Knighthood in 2012 and a plethora of other awards and honors in the following years. With his newfound esteem, Kostya led the design and establishment, and later became the first director of the National Graphene Institute (NGI) in Manchester—funded jointly by the UK Government and the EU—which opened in 2015 and is now the focal point of graphene research in the UK.

Quite fitting as a building that is part of the history of science, it also has a wider historical significance: the NGI is built on the site of the Albert Club, a Victorian establishment for Manchester’s German community working in the cotton industry, whose frequent clientele included social scientist and theorist, Friedrich Engels.

Engels lived in Manchester in the 1840s, and his intimate study of the English working classes in the age of the Industrial Revolution led to the publication of “The Condition of the Working Class in England”, an important contemporary text during the early days of world-changing industrial progress. The city of Manchester was a focal point of the Industrial Revolution in the 19th century, earning the nickname “Cottonopolis” as this namesake industry rapidly expanded.

In modern times, the mills and chimney stacks of Manchester’s industrial age are long gone, but with a major focus on shifting society to a fossil-fuel-free economy and the dawn of the so-called “Green Industrial Revolution” likely around the corner, Manchester may once again—along with the NGI—become the epicentre of technologies that change the world. Graphene has since seen an ever-increasing growth in research from the global community, allowing for potential applications in hydrogen storage for hydrogen fuel cells, to next-generation information storage in hard disks, and even the unlikely arena of neuromedicine.

Whilst graphene currently suffers from barriers that could lead to mass-scale production of large atomically-thin sheets, the science community has the spring in their step to make this a near-future possibility.

But none of these pioneering technologies that could help solve the problems facing the 21st century would be possible without the foundational work by Kostya and his Ph.D. supervisor early in the last decade, when simply peeling adhesive tape off bulk graphite gave birth to a new technological revolution that “Cottonopolis” could only have dreamt of.