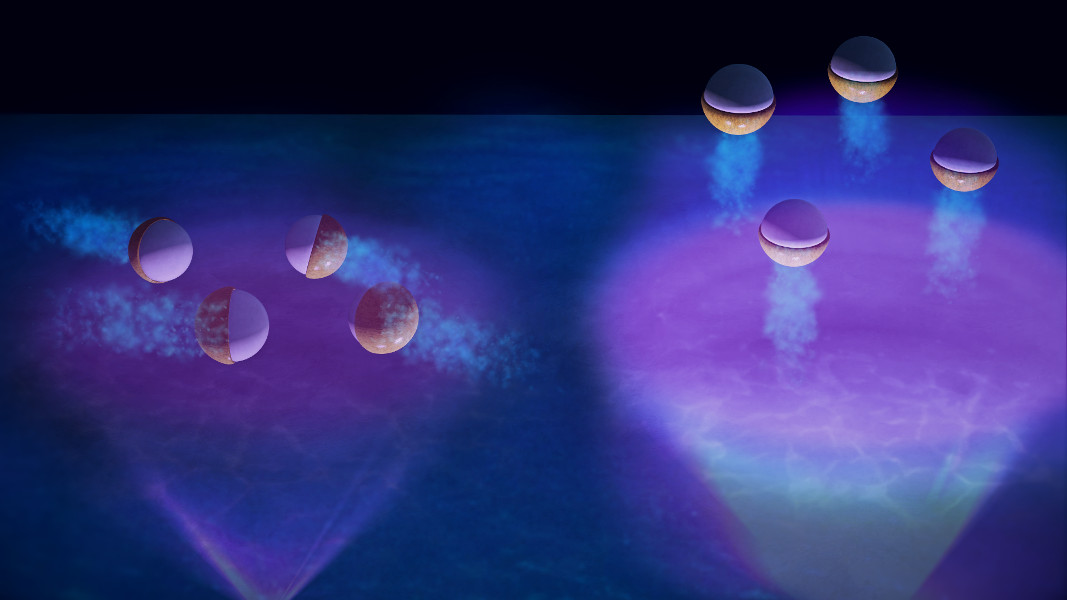 Synthetic nano/micromotors tcommonly associated to science fiction have recently attracted a great deal of attention as key tools in the macroworld to exploration of the nano/microworld.

Microswimmers, microwalkers, microrobots have been developed to perform complex tasks at the nano/micrometer scale that require an extremely high precision and are normally beyond human reach. For example, nano-/micro-array assembly and fabrication, microcargo loading/unloading and targeted transport, noninvasive microsurgery, etc.

Such micrometer scale devices are activated in response to an external stimulus (e.g., chemical or temperature gradients, magnetic, electric, light or acoustic fields) that is converted into mechanical energy and activates the device motion. Light offers a series of remarkable advantages as it allows for a reversible (on/off) and wireless control over (fuel-free) motion, also with excellent spatial and temporal resolutions.

In nature, some microorganisms move in response to (solar) light according to the so-called phototaxis behavior. In particular, microorganisms like phytoplankton and zooplankton exhibit peculiar photogravitactic swimming behavior, that is, they respond to sunlight by swimming against gravity. This regulates their daily migration in the living environment: during daylight hours, these microorganisms move toward illuminated regions (i.e., from bulk water to the air/water interface) for storing sunlight, while they move in the opposite direction during night (dark) hours. 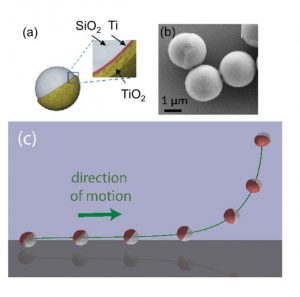 (a) Schematic drawing of the SiO2/Ti-TiO2 Janus particle; (b) SEM image of the silica/titania Janus particles, TiO2 cap (lighter gray) and SiO2 core (darker gray); (c) Example of lift-off trajectory. The particle remains near the surface for a short period of time, before moving into the bulk liquid.

Prof. Fischer and his team have recently implemented this principle into inorganic Janus particles, comprised of a SiO2 core half-covered with a Ti/TiO2 bilayer (Figure (a,b)). Incorporating this light-triggered gravitactic response in synthetic microswimmers led to controlled 3D motion in a fluid environment, beyond the translations and rotations due to Brownian phenomena, and a precise positioning at various depths within a liquid layer.

The photogravitactic swimming behavior of SiO2-Ti/TiO2 composite nanoparticles was tracked by digital inline holographic microscopy and, supported by a theoretical model developed within the framework of self-diffusiophoresis, the dependence on the light intensity and particle size of this photogravitactic migration was revealed. While at low light intensity the particles exhibit 2D wall-bound motion that is confined to the area closed to the illuminated surface, above a specific light intensity threshold (that depends on the particle size) not only the artificial swimmers lift from the illuminated wall, but also swim away from the light source, against gravity (Figure (c)).

The results of this study provide an avenue for novel applications of chemically active colloids based on designing photogravitactic particles. Such particles can indeed reversibly switch between operating near a boundary or in the volume away from the boundary by adjusting the light intensity; moreover, building on size-selective principles, the migration of polydisperse mixtures of active particles can be tuned for movement in or out of the boundary region. This study thus provides a simple design strategy to fabricate artificial microswimmers with 2D or 3D swimming behavior that can be simply activated and controlled with light.

Mimicking viral factories for better drug delivery
X-ray fingerprints of novel photocathode materials: A new route for theory and experiment to join ha...
Recyclable hydrogels for fast prototyping
What do carbon capture and beer bubbles have in common?