To PCE Infinity and Beyond: Recent Perovskite Research

Perovskite-based photovoltaics are currently achieving PCEs of just over 22%. Here are some interesting highlights of recent perovskite research.

The power conversion efficiency (PCE) is the key measure of worth for a solar cell. It indicates how much of the sun’s light can be converted to electricity by a given material or device configuration.

A relatively recent discovery and the current favourite material is perovskite. Photovoltaic devices based on perovskites have made surprising leaps in efficiency in just a short time, currently achieving PCEs of just over 22%. While this figure is still below the roughly 33% energy conversion efficiency of burning coal, it shows that solar power is now a genuinely strong contender to enter the market not only as a cleaner, renewable energy source, but as a better source of power in its own right.

Consequently, research into potential improvements in perovskite device performance is proceeding intensively, and some interesting recent highlights are presented here.

Researchers working in Erlangen, Germany, have looked into the hysteresis in current–voltage curves of devices made from mixed ionic–electronic semiconductor hybrid perovskites. This hysteresis impedes the accurate evaluation of a device. Their study, published in Advanced Materials Interfaces, shows how the use of ultrathin, mixed C60/organic self-assembled monolayers­—electron-transporting layers positioned between the ITO and the perovskite—allows improved charge extraction and greatly reduces this hysteresis compared to the use of TiO2. They suggest that the mechanism behind the effectiveness of the SAM is an improved crystal quality of the solution-processed perovskite films, meaning fewer defects. This leads to the suppression of defect-mediated bulk ion migration and, consequently, of the hysteresis in the range of 1 to 100 Hz. 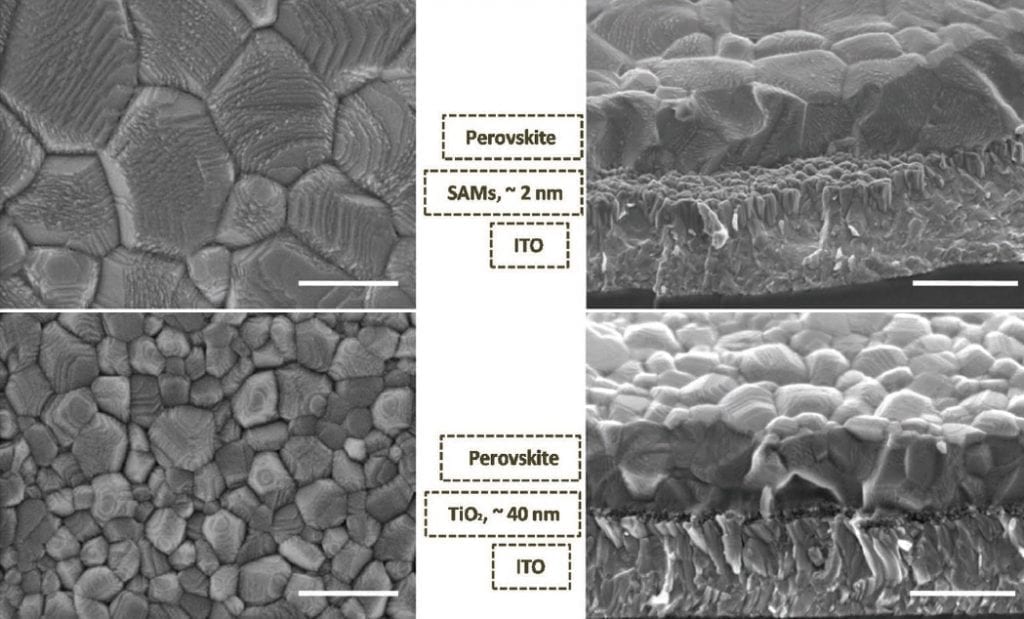 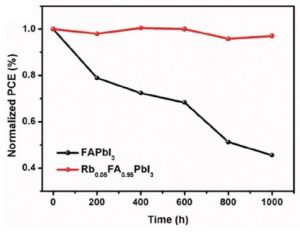 Meanwhile, research from Korea suggests a solution to the extreme moisture sensitivity which severely limits the useful lifetime of perovskite solar cells based on organic monovalent cations. Perovskites exposed to water readily form hydrates and end up decomposing into lead iodide. The application of caesium ions, creating a mixed inorganic­–organic system, has been shown to improve their moisture stability, but the devices remain structurally unstable, converting to photo-inactive crystal phases upon heating or over time. In their Advanced Functional Materials paper, these researchers used rubidium ions instead, which have a smaller ionic radius and are less volatile than Cs, and demonstrated an improved stability of FAPbI3 cells in 85% humidity conditions without encapsulation, providing at least 1000 working hours at a higher PCE than the purely organic system. Importantly, the incorporation of the Rb ions also made the conversion to the photoactive black crystal phase favourable, preventing transition back to the inactive phase. 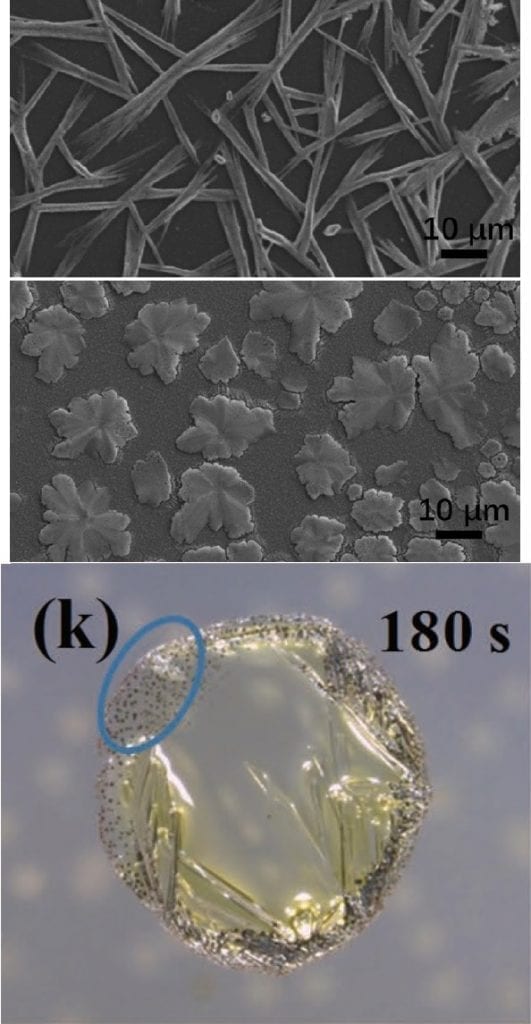 Not so far away, researchers at Tsinghua University, China, have applied a drop-on-demand jetting method to allow the investigation of the crystallisation and growth of methylammonium lead iodide (MAPbI3) perovskite in situ. Generating microdroplets of dimethylformamide with different concentrations of MAI and PbI2 precursors, they observe two distinct modes of perovskite crystallisation. One mode forms needles, which appear to behave in a similar way to those generated via spin-coating the same material; in the other mode, grains of perovskite nucleate first at the edges of the droplet and prior to the appearance of large, needle-shaped forms. The crystallisation mode appears to be directly dependent on the concentration of the MAI and PbI2 precursors, with a higher MAI concentration leading to a change from needle- to leaf-shaped crystals. The researchers are able to explain the different nucleation and growth modes and, conveniently, this method can be applied to related crystalline materials.