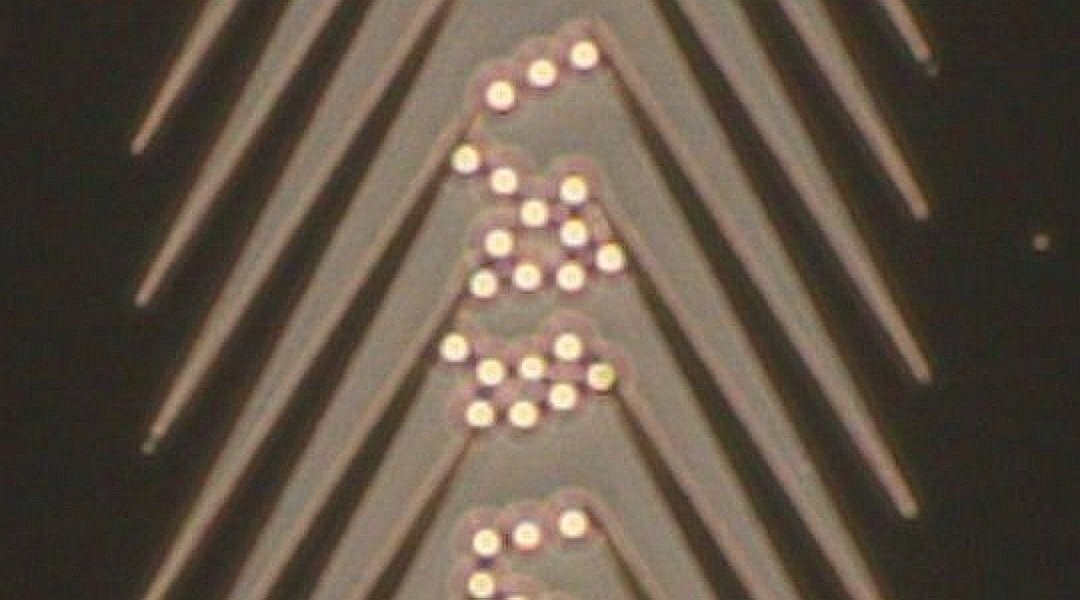 In order to create sophisticated biomedical chips, sensors, chemical assays, and small electromagnetic devices, such as computer chips or microgenerators, scientists need to be able to control the movement of particles and molecules on a surface in order to guide them through a particular system for a specific function. To date, advancements in microtechnologies such as microelectromechanical systems (MEMS) — microdevices with micro-scale moving parts, for example, switches, sensors, and gyroscopes — and micro-total analysis systems — devices that automate chemical analysis — have been accomplished as a result of this directional movement.

One technique in particular is inspired by the directional motion of biological motors, which is achieved by creating potential energy differences across a surface to drive the movement of molecules. This setup is referred to as “ratchet transport” and is based on the idea of overall movement in a specific direction, guided or provided by a potential energy surface that is periodic or asymmetric: like a sawtooth blade, for example.

While intriguing, building micrometer-sized chips with “tracks” built from sawtooth-shaped electrical potentials has proven complicated in the past because the potential needs to be periodically turned on and off to drive the movement of molecules, making the system complicated to operate.

In a recent study published in Advanced Intelligent Systems, Professor Masahiro Takinoue and Dr. Masayuki Hayakawa from Tokyo Institute of Technology proposed a new method for particle transport that occurs spontaneously through the crowding of polystyrene microparticles.

“Unlike previous studies, we have achieved the collective transport of molecules without having to periodically switch the system’s electric potential, as the collision-based interaction between the crowded particles creates a spontaneous periodical switching of electric potential,” said the authors.

According to them, several theoretical studies conducted on ratchet transport have reported that the interaction between particles as a result of crowding (for example steric interactions) has influence over the particles’ motion, and therefore has the ability to enhance it if the conditions are properly manipulated.

“This phenomenon generated by crowding has been theoretically observed in the transport of passive particles under dynamic potential as well as self‐propelled particles under static potential,” said the authors in their study. “As an example, 1D models that forbid the overlapping of particles show that particle interaction enhances the transport of passive particles under dynamic potential. Furthermore, examination through computer simulation of the behavior of sterically interacting, self‐propelled, run‐and‐tumble particles, in the presence of a quasi‐1D asymmetric substrate, indicates that the particle flux can be increased.”

In their study, the researchers demonstrated collective transport based on particle interactions between polystyrene particles by applying a directional voltage without any required control over the potential, meaning any devices built from this design could be simple and compact.

This result means that the particles were not pulled along by the electric potential, but that their motion emerged as a result of collision between the crowded particles.

“This could be a means of overcoming sample clogging, which is one of the problems in transportation within a micrometer-sized device,” said Takinoue. “It is expected that this collective transport will be a base idea to develop smart functions, such as sorting in accordance with the shape, size, and [the surface’s] physical and chemical properties of particles.”