The action of a self-oscillating polymer gel controls the direction of fluid flow within a confined space using a system of polymer brush pentagons.

Termed an ‘autonomous’ material—one which acts without the need for an external stimulus—the polymer gel created by researchers at The University of Tokyo and Tokyo Women’s Medical University undergoes a regular swelling–de-swelling action due to the hydration/dehydration of the polymer in a Belousov–Zhabotinsky (BZ) reaction, when no external change is applied. The motion generates an oscillation in the surrounding media, which they have now developed to control the direction of fluid flow within a confined space.

That space, described in their recent Small article, is a sophisticated system of polymer brush pentagons formed from the self-oscillating polymer, patterned onto a glass substrate in linear arrays using a combination of mask-free photolithography and surface-initiated atom transfer radical polymerization.

The size of the gap between pentagons was varied and the redox state-dependent switching of the fluorescence signal from Ru(bpy)3, added to the polymer brush-patterned regions only, was used to track the directional propagation of the BZ reaction. Interestingly, it was found that the chemical wave direction was not the same for all patterns. 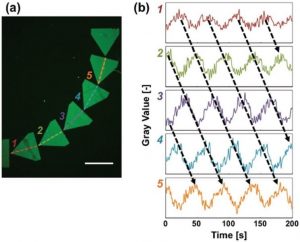 Fluorescence tracking over time was also used to determine the velocities of the chemical waves, which appeared to be independent of the alignment of pentagons and which, for one sample, reached 50.3 micrometres per second.

Tuning the balance between the amount of activator for the BZ reaction (HBrO2) and the gap distance between pentagons allowed control over the wave direction in both 1D and 2D patterned forms, over a distance of 5 millimetres. These researchers foresee the development of such poly mer brush systems toward the creation of controlled soft interfaces that are autonomously dynamic, toward allowing mass transport at the micro level.