Scientists probe the optoelectric behaviour of bismuth ferrite at the nanoscale and propose a novel ferroelectric-based memory application. 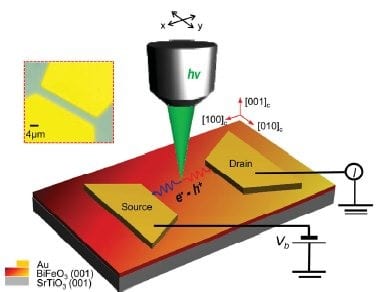 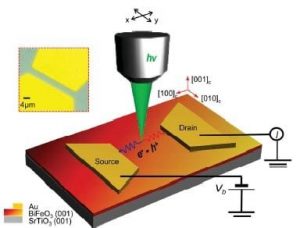 A schematic of the bismuth ferroite spatially-resolved photodetector showing the diffraction-limited laser raster-scanning the device channel. The inset is a photograph of the device electrodes taken through an optical microscope.

Ferroelectrics have already found applications in non-volatile random access memory (RAM) and so far the Fujitsu company has made more than 1 billion FeRAM devices (if you open up a Playstation 2, for example, you’ll find one inside).  One critical, yet often overlooked, problem with ferroelectrics is leakage in which the material has a measurable dc conductivity.  Leakage is tolerated to a certain extent depending on the intended application and it can be limited by careful processing and doping.

However, leaky ferroelectrics, and ferroelectrics in general also exhibit complex – sometimes mysterious – optoelectric characteristics that have been observed for 50 years but are still not fully understood.  Taking advantage of this mysterious behaviour, a collaboration between scientists at POSTECH and KAIST in Korea, Rutgers University and the University of Cambridge has probed the optoelectric behaviour of bismuth ferrite (BiFeO3) at the nanoscale and proposed a novel optical memory application.

They report in Advanced Optical Materials a BiFeO3 photodetector, in which a chopped laser beam scans the surface of a BiFeO3 film with a spot size of ~ 500 nm.  Using this technique it is possible to measure both the photocurrent and photovoltage spatially, initial results that bode well for memory applications.