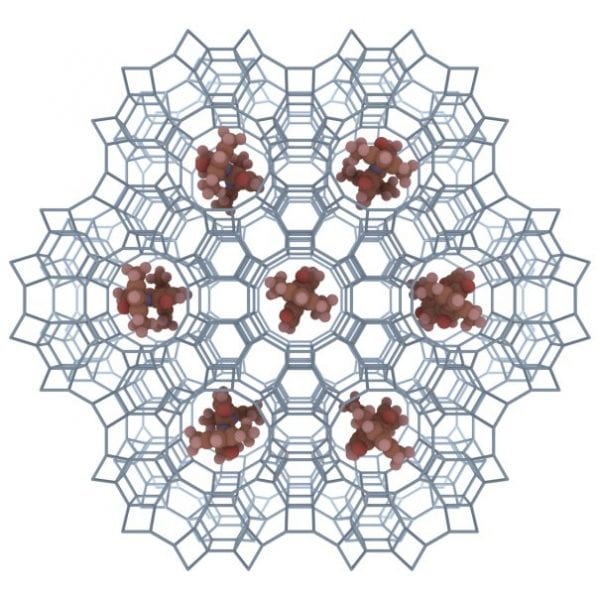 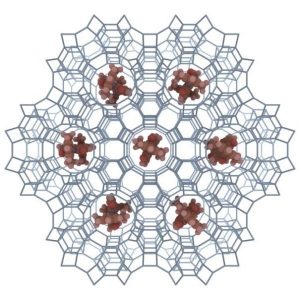 Zeolite L is an electrically insulating aluminosilicate crystalline system, which consists of many channels running through the whole crystal and oriented parallel to the cylinder axis. The geometrical constraints of the zeolite host structure allow for the formation of one-dimensional chains of highly uniaxially oriented molecules.

Researchers of MESA+, the research institute for nanotechnology of the University of Twente, in cooperation with researchers of the University of Strasbourg and Eindhoven University of Technology, are the first to successfully create perfect one-dimensional molecular wires in which the electrical conductivity can almost entirely be suppressed by a weak magnetic field at room temperature. The underlying mechanism is possibly closely related to the biological compass used by some migratory birds to find their bearings in the geomagnetic field. This spectacular discovery may lead to radically new magnetic field sensors, for smartphones for example.

In their experiments, the researchers made use of DXP, the organic molecule which is a red dye of the same type as once used by Ferrari for their famous Testarossa. In order to thread the molecules so that they form one-dimensional chains of 30 to 100 nanometers in length – 1 nanometer being 1 billionth of a meter – they applied a smart trick: they locked the molecules in zeolite crystals. Zeolites are porous minerals composed of silicon, aluminum and oxygen atoms with narrow channels, like the lift shafts in a block of flats. The diameter of the channels in the zeolites is only 1 nanometer, just a little wider than the molecule’s diameter. This enabled the researchers to create chains of aligned molecules inside the zeolite channel, which are only 1 molecule wide.

The zeolite crystals containing the molecular wires were then placed on an electricity-conductive substrate. By placing a very sharp conductive needle, of an atomic force microscope (AFM), on top of a zeolite crystal, the researchers were able to measure the electrical conductivity in the molecule chains. Professor Wilfred van der Wiel, who developed and led the experiment, says that measuring the electrical conductivity in these molecular electric wires is a unique result in itself. “But the behavior of these wires is simply spectacular when applying a magnetic field,” he adds. This is because electrical conductivity nearly completely breaks down in a magnetic field of just a few milliteslas in size, a field which you could easily generate with a refrigerator magnet. Van der Wiel: “The fact that the effect is so dramatic and occurs even in small magnetic fields at room temperature makes this result very special.”

The change in electrical resistance through a magnetic field is called magnetoresistance and is very important in technology. It is also used in hard disk read heads. Usually, magnetic materials are indispensable for creating magnetoresistance. However, the ultra-high magnetoresistance which has been measured in Twente was achieved without any magnetic materials. The researchers ascribe this effect to the interaction between the electrons carrying electricity and the magnetic field which is generated by the surrounding atomic nuclei in the organic molecules. Current suppression in a small magnetic field can ultimately be traced back to the famous Pauli exclusion principle, the quantum mechanical principle that states that no two electrons (fermions) may have identical quantum numbers. Since the electric wires are essentially one-dimensional, the effect of the Pauli exclusion principle is dramatic, comparable to an accident on a single-lane road that brings traffic to a standstill. This interpretation is supported by calculations.

The mechanism that is responsible for ultra-high magnetoresistance in molecular wires is possibly closely related to the biological compass used by some migratory birds to find their bearings in the geomagnetic field. Researchers of the University of Twente are conducting follow-up experiments in the hope to be able to shed more light on this analogy.

Biocompatible organic transistors
Can AI solve the mysteries of photonic nanostructures?
Printing in color with photoswitchable polymers
Using a comb made of lasers to study greenhouse gases