A new technology developed at MIT may help to make biomarker detection, and cancer diagnostics, much easier. 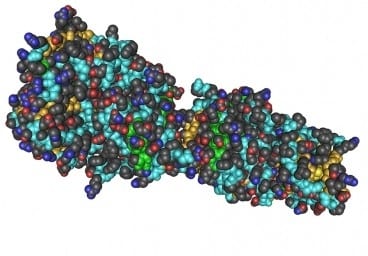 These nanoparticles created by MIT engineers can act as synthetic biomarkers for disease. The particles (brown) are coated with peptides (blue) that are cleaved by enzymes (green) found at the disease site. The peptides then accumulate in the urine, where they can be detected using mass spectrometry. Image: Justin H. Lo.

Finding ways to diagnose cancer earlier could greatly improve the chances of survival for many patients. One way to do this is to look for specific proteins secreted by cancer cells, which circulate in the bloodstream. However, the quantity of these biomarkers is so low that detecting them has proven difficult.

A new technology developed at MIT may help to make biomarker detection much easier. The researchers, led by Sangeeta Bhatia, have developed nanoparticles that can home to a tumor and interact with cancer proteins to produce thousands of biomarkers, which can then be easily detected in the patient’s urine.

This biomarker amplification system could also be used to monitor disease progression and track how tumors respond to treatment, says Bhatia, the John and Dorothy Wilson Professor of Health Sciences and Technology and Electrical Engineering and Computer Science at MIT.

“There’s a desperate search for biomarkers, for early detection or disease prognosis, or looking at how the body responds to therapy,” says Bhatia, who is also a member of MIT’s David H. Koch Institute for Integrative Cancer Research. She adds that the search has been complicated because genomic studies have revealed that many cancers, such as breast cancer, are actually groups of several diseases with different genetic signatures.

The MIT team, working with researchers from Beth Israel Deaconess Medical Center, described the new technology in a paper appearing in Nature Biotechnology on Dec. 16. Lead author of the paper is Gabriel Kwong, a postdoc in MIT’s Institute for Medical Engineering and Science and the Koch Institute.

Cancer cells produce many proteins not found in healthy cells. However, these proteins are often so diluted in the bloodstream that they are nearly impossible to identify. A recent study from Stanford University researchers found that even using the best existing biomarkers for ovarian cancer, and the best technology to detect them, an ovarian tumor would not be found until eight to 10 years after it formed.

“The cell is making biomarkers, but it has limited production capacity,” Bhatia says. “That’s when we had this ‘aha’ moment: What if you could deliver something that could amplify that signal?”

Serendipitously, Bhatia’s lab was already working on nanoparticles that could be put to use detecting cancer biomarkers. Originally intended as imaging agents for tumors, the particles interact with enzymes known as proteases, which cleave proteins into smaller fragments.

The researchers coated their nanoparticles with peptides (short protein fragments) targeted by several of the MMP proteases. The treated nanoparticles accumulate at tumor sites, making their way through the leaky blood vessels that typically surround tumors. There, the proteases cleave hundreds of peptides from the nanoparticles, releasing them into the bloodstream.

The peptides rapidly accumulate in the kidneys and are excreted in the urine, where they can be detected using mass spectrometry.

This new system is an exciting approach to overcoming the problem of biomarker scarcity in the body, says Sanjiv Gambhir, chairman of the Department of Radiology at Stanford University School of Medicine. “Instead of being dependent on the body to naturally shed biomarkers, you’re sampling the site of interest and causing biomarkers that you engineered to be released,” says Gambhir, who was not part of the research team.

To make the biomarker readings as precise as possible, the researchers designed their particles to express 10 different peptides, each of which is cleaved by a different one of the dozens of MMP proteases. Each of these peptides is a different size, making it possible to distinguish them with mass spectrometry. This should allow researchers to identify distinct signatures associated with different types of tumors.

In this study, the researchers tested their nanoparticles’ ability to detect the early stages of colorectal cancer in mice, and to monitor the progression of liver fibrosis.

Liver fibrosis is an accumulation of scarring in response to liver injury or chronic liver disease. Patients with this condition have to be regularly monitored by biopsy, which is expensive and invasive, to make sure they are getting the right treatment. In mice, the researchers found that the nanoparticles could offer much more rapid feedback than biopsies.

They also found that the nanoparticles could accurately reveal the early formation of colorectal tumors. In ongoing studies, the team is studying the particles’ ability to measure tumor response to chemotherapy and to detect metastasis.