A non-intrusive optical technique called GASMAS shows potential of being developed into a realtime and cost-effective diagnostic tool for human sinuses. 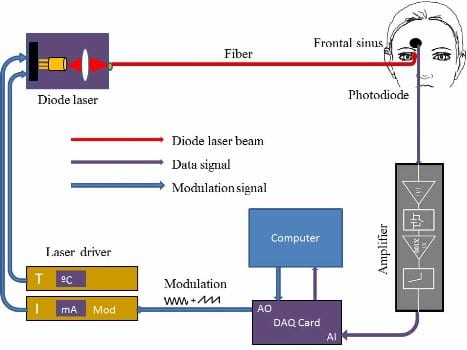 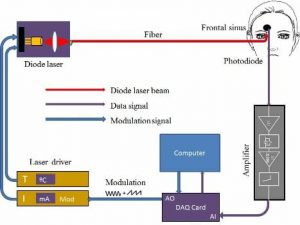 Water vapor which is related to the free gas volume of sinus cavities can be assessed by tunable diode laser spectroscopy and showed good stability in healthy volunteers over extended times. The results are promising regarding the detection of anomalies due to sinusitis.

Guangzhou (China) – Sinusitis is a very common disease. Most frequently, it can be successfully treated with decongestants and antiinflammatory drugs. Only prolonged infections related to bacteria should be treated with antibiotics.

Unfortunately, antibiotics are much too frequently prescribed. Over-prescription of antibiotics is a truly worldwide and alarming problem, jeopardizing effective treatments when really needed. Improved diagnostic tools could help assessing an infection is of bacterial or viral origin and antibiotics have to be applied or not.

A team of scientists from the South China Normal University (Guangzhou, China) and the Lund University (Sweden) led by Sune Svanberg now presents a new approach for a non-intrusive optical technique for human sinus realtime diagnostics that could be developed into a cost-effective, easy-to-use hand-held instrument.

The method is based on a technique called Gas in Scattering Media Absorption Spectroscopy (GASMAS) which allows studies of gases inside porous and highly scattering solids and was introduced in 2001 by Svanberg and co-workers. GASMAS is related to tunable diode laser absorption spectroscopy, TDLAS, and makes use of the high spectroscopic contrast between the extremely sharp spectral absorption lines of free gases and the slowly varying absorption fingerprints of bulk solid material.

The researchers studied the water vapor in the frontal sinuses at around 937 nm in healthy volunteers. The amount of water vapor is a measure for the free gas volume. The results showed a good stability of the GASMAS signals over extended times for the frontal sinuses of all volunteers, showing promising applicability to detect anomalies due to sinusitis. Even the application of a decongestion spray did not change the signals noticeably. The water vapor concentration is given by the temperature only, and is not influenced by changes in cavity ventilation.

In the healthy subjects, a zero or close to zero water vapor value was never observed. In contrast, as had been shown earlier in a clinical study with GASMAS measurement immediately after CT investigation, values close to zero are typical for patients with sinusitis. The possibility of low signal readings due to casual changes in the sinus interior, not related to sinus problems, could thus be largely eliminated.

GASMAS also offers the possibility of determining the concentration of oxygen, which is related to the ventilation of the sinuses and shows a good potential in distinguishing between infection of bacterial and viral origin.

The researchers are confident that GASMAS could be the base for the development of a compact hand-held instrument for noninvasive, realtime and cost-effective diagnostics for human sinuses. In the case of recurrent disease, stored data could be used as a reference, offering additional diagnostic power.
(Text contributed by K. Maedefessel-Herrmann)