A new family of dielectric materials 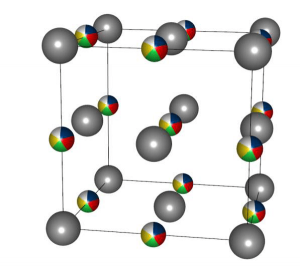 In the last decade it was shown that metallic alloys containing typically five or more elements could form solid solutions driven by large entropy of configuration. Some of these alloys, named high entropy alloys, have been thoroughly studied due to their remarkable physical properties. In a recent paper (Entropy-stabilized oxides by C. M. Rost et al., Nature Communications, 6, 8485, 2015) it was established that, similarly, a new class of oxide materials can be stabilized by entropy of configuration, the newly called “entropy-stabilized oxides”. It has been shown in this initial report that mixing five equimolar bivalent oxides, heated at high temperature and quenched, yielded an unexpected compound with rock-salt structure.

A team from ICMMO (Institut de Chimie Moléculaire d’Orsay) of Université Paris-Saclay recently showed that these compounds can be substituted by aliovalent elements with charge compensation mechanisms, which widens the compositional phase space to a huge number of variants, and probably properties and applications. Examples of compositions developed in Orsay are (Mg,Co,Ni,Cu,Zn)1-xLixO, (Mg,Co,Ni,Cu,Zn)1-2xLixGaxO, (Li,Mg,Co,Ni,Cu,Zn)O, (Mg,Co,Ni, Cu,Zn)1-x(LiGa)xO and were called high entropy oxides. It should be stressed out that, contrary to the surface oxidized high entropy alloys, which do not show well defined compositions, but are also called high entropy oxides although they cannot formally considered as oxides, these new oxides are well defined structurally and from a stoichiometric point of view (a unit cell is shown in the figure, where each cationic site is randomly occupied by one of the constituting cations).

It is noteworthy the impressive amount of substitutions possible as well as the possibility of forming new systems with the same approach. This might well be a “paradigm shift” in material science.

The text is kindly provided by Nita Dragoe