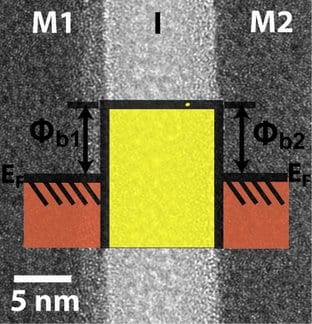 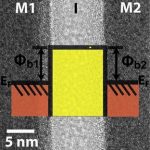 It’s a lesser-known Moore’s law – with the advent of high-speed computing, advanced display technology, and next-generation communications system, current diode technology is reaching its limit. The problem is fundamental – silicon-based transistors, while able to control the flow of electrons, are limited by the speed at which they move in the material – once you reach that speed limit, you just can’t go any faster.

At least, that would be the case if not for quantum mechanics, which has come to the rescue once again, via quantum tunneling, a phenomenon whereby electrons pass from one conducting layer to another, skipping (or tunneling through) an insulating layer separating the two.

Electronics researchers have in fact recognized the potential of this process for decades; since the 1960s, groups have been attempting to take advantage of it by developing metal-insulator-metal diode systems, electronic sandwiches that could do the job of traditional transistors with better speed and efficiency.

Until now, they’ve been unsuccessful. Enter an interdisciplinary group from Oregon State University – succeeding where past researchers have failed, they have constructed high-performance M-I-M diodes at relatively low temperatures and using relatively simple and easily scalable fabrication techniques.

The group are confident that their new technology, believing that new technologies, industries, and high-tech jobs will result from their research. Are we seeing the end of the silicon transistor?

Printable Paper from Plastic Waste
Searching for a needle in the haystack: Fast screening for new catalysts
Paving the Way for Calcium Batteries
The world's fastest high-precision 3D printer