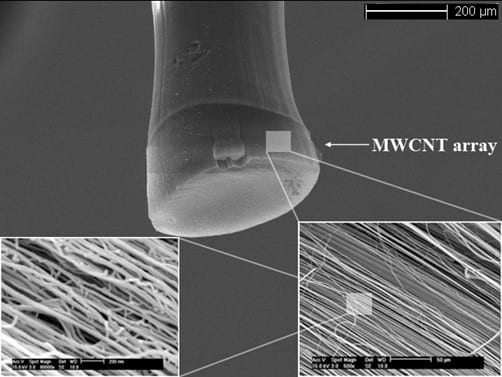 Cyanobacterial harmful algal blooms frequently occur in drinking water sources around the world due to eutrophication as a result of antrophogenic activities. Their presence in water is a potential threat because some species of cyanobacteria can produce and release potent toxic compounds (cyanotoxins), such as hepatotoxins, neurotoxins, and dermatotoxins.

Among hepatotoxins, microcystins (MCs) are the most frequently reported cyanotoxins and MC-LR is the most commonly occurring congener of MCs worldwide as well as in the USA. The World Health Organization (WHO) has proposed a provisional concentration limit of MC-LR in drinking water of 1 μg L-1. Therefore, there is a need for techniques to monitor MC-LR in various sources of water. 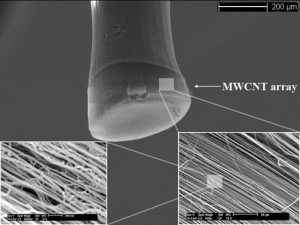 A fabricated electrode with a grown MWCNT array (CNT post fabricated at the UC Nanoworld Lab).

Recently, Prof. Dionysiou’s group at the University of Cincinnati (UC) in the USA and his collaborators (UC and USEPA, Cincinnati, USA; and NCSR Demokritos, Athens, Greece) developed a multi-walled carbon nanotube (MWCNT)-based electrochemical biosensor to monitor MC-LR in sources of drinking water supplies.

They reported the formation of oxygen-containing functional groups on the MWCNT surface following electrochemical functionalization in alkaline solution. The performance of the MWCNT array biosensor demonstrated a marked increase of the electron-transfer resistance upon antibody conjugation. The biosensor’s electron-transfer resistance showed a linear dependence on the MC-LR concentration ranging from 0.05 to 20 μg L-1. The sensing performance of the biosensor at low MC-LR concentration allows monitoring of this cyanotoxin well below the drinking water provisional concentration limit of 1 μg L-1.

Wireless, wearable sensor created for deep-tissue monitoring
Reviewing the Decision-Making Behavior of Irrigators
The World’s Most Powerful Tidal Turbine
Why We Need to Shift Governance Beyond the Blue Water Basin