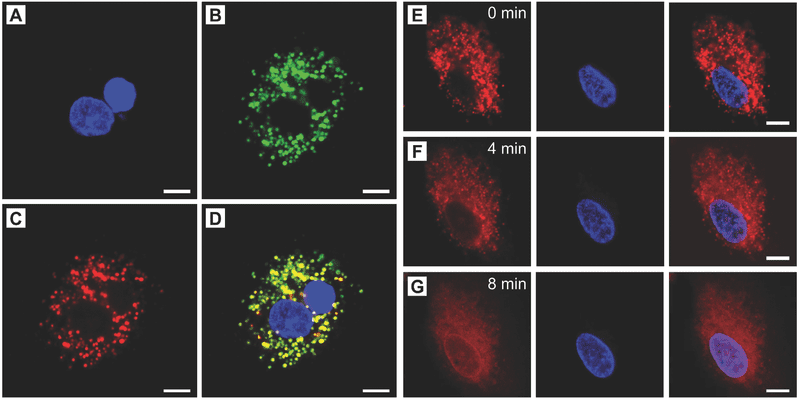 Smart systems for applications in on-demand drug release allow for sustained release, with fast responses to a variety of stimuli (e.g., light, temperature, ultrasound, pH, mechanical stress and specific biomolecules). Near-infrared (NIR) light systems are especially attractive candidates due to their capacity to deeply penetrate soft tissues via remote application with high spatial and temporal resolution. To this end, a number of NIR light systems have been designed which are based on conformational changes of thermoresponsive polymers that trigger drug release. However, it remains a challenge to apply these synthetic polymers in clinical settings, due to the associated complex procedures, low degradability and cytotoxicity. 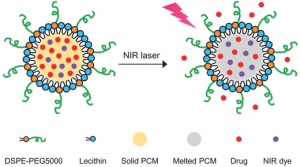 Schematic illustration showing the NIR-triggered release of drug molecules from a PCM nanoparticle made of a eutectic mixture of two fatty acids.

Phase-change materials (PCMs) are attractive targets for NIR based systems, because they have a high latent heat of fusion and exhibit a reversible solid–liquid transition over a narrow range of temperatures. Natural fatty acids are particularly attractive PCMs because they are inexpensive, chemically stable and biocompatible. However, the described systems only focus on single fatty acids, which makes it difficult to obtain melting points around 37°C (physiological temperature). Also, the encapsulated drugs are likely to be excluded from the hydrophobic core due to the tendency of pure saturated fatty acids to crystallize upon cooling, leading to a drug-rich outer layer and undesired burst release.

To remedy these problems, Dr. Zhu and colleagues of the Georgia Institute of Technology and Emory University have recently fabricated a eutectic mixture of natural fatty acids for NIR-triggered drug release, as seen in Advanced Materials.

As a proof of concept, the researchers formulated a mixture of lauric acid and stearic acid, with encapsulated IR780 iodide (NIR-absorbing dye) and doxorubicin (DOX) (an anticancer drug). Upon NIR irradiation, the nanoparticles are quickly heated up due to the photothermal effect of the dye, increasing the temperature beyond the eutectic point (39°C), melting the nanoparticles and releasing the payloads. Fluorescence microscopy analysis (Figure below) revealed that the DOX trapped in the nanoparticles is efficiently released into the cytosol under NIR irradiation, resulting in enhanced anticancer activity.

This system offers a plethora of advantages. First, the fatty-acids are naturally occurring in the body, therefore the nanoparticles are biocompatible and biodegradable. These specific fatty acids also increase high-density lipoprotein and decrease low-density lipoprotein, leading to a decrease in atherosclerotic risk. Finally, the mixture is solid at 37 °C (physiological conditions), preventing leakage of the drug prematurely.

In the future, the researchers hope to functionalize the PCM nanoparticles with tumor-targeting ligands to achieve targeted drug delivery.

Pushing the Limits of Technology to Enhance Electronic Skins
AI for drug discovery: What can we do?
Conserved elements in viral genomes may provide targets for broad-spectrum drugs
Smart bandage to heal chronic wounds