Nanosystem will improve sensing in the infrared

A team of University of Pennsylvania engineers has used a pattern of nanoantennas to develop a new way of turning infrared light into mechanical action. 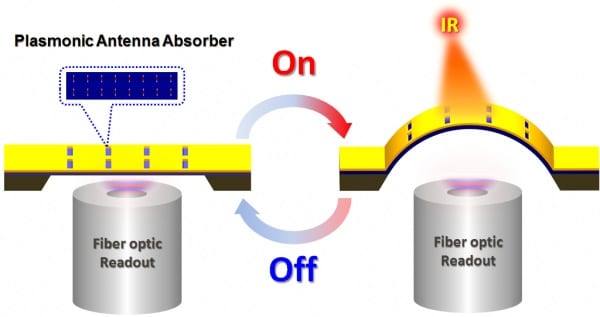 A team of University of Pennsylvania engineers has used a pattern of nanoantennas to develop a new way of turning infrared light into mechanical action, opening the door to more sensitive infrared cameras and more compact chemical-analysis techniques.

A diagram showing how the researchers’ optomechanical infrared-detecting structure works.

The research was conducted by assistant professor Ertugrul Cubukcu and postdoctoral researcher Fei Yi, along with graduate students Hai Zhu and Jason C. Reed, all of the Department of Material Science and Engineering in Penn’s School of Engineering and Applied Science. It was published in the journal Nano Letters.

Detecting light in the mid-infrared range is important for applications like night-vision cameras, but it can also be used to do spectroscopy, a technique that involves scattering light over a substance to infer its chemical composition. Existing infrared detectors use cryogenically cooled semiconductors, or thermal detectors known as microbolometers, in which changes in electrical resistance can be correlated to temperatures. These techniques have their own advantages, but both need expensive, bulky equipment to be sensitive enough for spectroscopy applications.

“We set out to make an optomechanical thermal infrared detector,” Cubukcu said. “Rather than changes in resistance, our detector works by connecting mechanical motion to changes in temperature.”

The advantage to this approach is that it could reduce the footprint of an infrared sensing device to something that would fit on a disposable silicon chip. The researchers fabricated such a device in their study.

At the core of the device is a nanoscale structure — about a tenth of a millimeter wide and five times as long — made of a layer of gold bonded to a layer of silicon nitride. The researchers chose these materials because of their different thermal expansion coefficients, a parameter that determines how much a material will expand when heated. Because metals will naturally convert some energy from infrared light into heat, researchers can connect the amount the material expands to the amount of infrared light hitting it.

“A single layer would expand laterally, but our two layers are constrained because they’re attached to one another,” Cubukcu said. “The only way they can expand is in the third dimension. In this case, that means bending toward the gold side, since gold has the higher thermal expansion coefficient and will expand more.”

To measure this movement, the researchers used a fiber interferometer. A fiber optic cable pointed upward at this system bounces light off the underside of the silicon nitride layer, enabling the researchers to determine how far the structure has bent upwards.

“We can tell how far the bottom layer has moved based on this reflected light,” Cubukcu said. “We can even see displacements that are thousands of times smaller than a hydrogen atom.”

Other researchers have developed optomechanical infrared sensors based on this principle, but their sensitivities have been comparatively low. The Penn team’s device is an improvement in this regard due to the inclusion of “slot” nanoantennas, cavities that are etched into the gold layer at intervals that correspond to wavelengths of mid-infrared light.

“The infrared radiation is concentrated into the slots, so you don’t need any additional material to make these antennas,” Cubukcu said. “We take the same exact platform and, by patterning it with these nanoscale antennas, the conversion efficiency of the detector improves 10 times.”

The inclusion of nanoantennas provides the device with an additional advantage: the ability to tailor which type of light it is sensitive to by etching a different pattern of slots on the surface.

“Other techniques can only work at the maximum absorption determined by the material itself,” Yi said. “Our antennas can be engineered to absorb at any wavelength.”

While only a proof-of-concept at this stage, future research will demonstrate the device’s capabilities as a low-cost way of analyzing individual proteins and gas molecules.