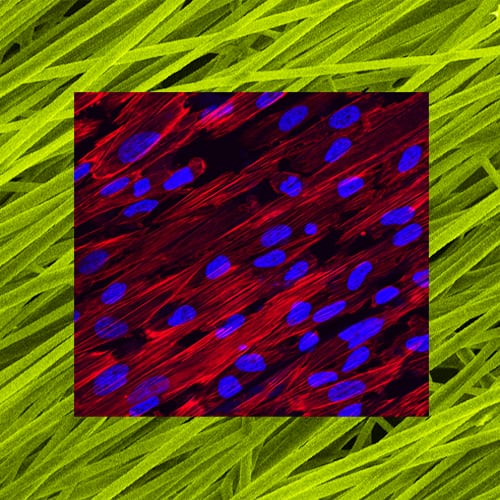 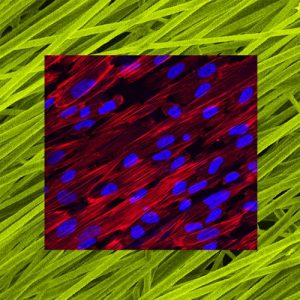 The extracellular matrix is a distinct network of proteins whose fibrils have subcellular (10-300 nm) diameters and provide architectural and mechanical support to cells within living tissues and organs. These structures tightly influence cellular adhesion and migration, which are in turn involved in several processes such as embryogenesis, homeostasis, tissue remodeling and lesion healing.

Bioactive polymer nanofibers are of utmost interest for regenerative medicine, since they closely mimic the organization and size of the protein filaments present in the extracellular matrix. Among the methods for the fabrication of polymer nanofibers, electrospinning is low-cost, straightforward, and versatile, and it allows the degree of alignment of the resulting fibers to be controlled. However, poor cellular colonization can be an issue for nanofibrous scaffolds lacking specific cell-binding motifs, which is especially critical for delicate stem cell populations.

Dario Pisignano, Anna Sciancalepore and their co-workers at the Euromediterranean Center for Nanomaterial Modelling and Technology (Istituto Nanoscienze-CNR) and at the Universities of Salento and Foggia have studied the properties of electrospun polymer nanofibers to address differentiation of stem cells.

In a recent article, they introduce new bioactive scaffolds based on poly(L-lactic acid) fibers, modified with a peptide sequence derived from fibronectin, one of the key component of the extracellular matrix. The researchers investigate the effects of the peptide immobilization on the adhesion and spreading of human, adult renal stem cells. They show that on aligned fibers, stem cells elongate significantly and reach high densities, whereas those grown on randomly oriented scaffolds are clustered in isolated groups. An enhanced tubular commitment appears to be related with this alteration of cell morphology, even in basal medium conditions during cell culturing.

In the same article, the authors also overview existing literature on electrospun nanofibers for regenerative medicine based on stem cells. They anticipate that the functionalization of aligned fibers can be applied with different peptide sequences, which is promising to target a specific response of different stem cells in tissue engineering.

Dario Pisignano’s and Anna Sciancalepore’s article is a contribution to the special issue Young Talents in Polymer Science published in Macromolecular Chemistry and Physics.