The Helmholtz-University Young Investigators Group has developed a membrane that can be used for filtering small organisms or viruses from water. 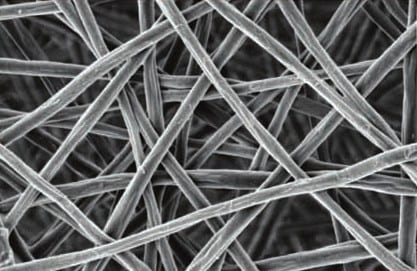 A membrane consisting of polymer fibres and proteins would make a novel filter for tiny, nano-scaled particles in aqueous solutions. The result of such research, done by Professor Mady Elbahri and his team from the Institute of Material Science at Kiel University and the Institute of Polymer Research at Helmholtz-Zentrum Geesthacht, has recently been published as the cover article in the issue 22 of Advanced Functional Materials.

A nanofluid, a colloidal suspension of, for example, metal nanoparticles in water, passes easily through commonly used macroporous polymeric membranes. The particles are too small to be held using hole diameters between three and four micrometers. In addition, the particles would block smaller sieve openings rapidly. Hence, pressure would be necessary to filter out the fluid.

In order to solve these problems, Elbahri and his team biofunctionalized their membrane and added a commercially available protein to the fibres. “We found out that the protein undergoes a conformational change under water, and its ability to capture all the metal nanoparticles during the filtration process is activated”, explains Elbahri. “This is a breakthrough”, adds co-author Dr. Shahin Homaeigohar. “The same principle will hopefully enable us to filter bio-molecules and organisms out of waste water.”

From filtration to solar thermal energy
When the nano sieve captures metal particles such as gold, another application is at hand, as no other method has succeeded in dispersing the particles so well. “This result was unexpected”, says Elbahri. “Under dry conditions, the membrane shows the color of the metal, in this case the red of the gold nanoparticles”. When the membrane gets wet, it becomes black. “Then it acts as an omnidirectional perfect black absorber, which can be used as a solar absorber.” Elbahri adds: “Indeed we bridge the gaps between several disciplines – chemistry, physics, bioscience and materials science that is – and the Nanochemistry and Nanoengineering group has now initiated the first step toward intradisciplinarity of nanoscience.”

Application as a virus and bio-filter
The nano sieve will allow filtering of very small particles or biomolecules and organisms such as viruses out of water. The scientists involved have already patented their innovation, a bio-nano-composite, in Europe. Another patent for the USA is on its way. Besides its application in water filtration, the nano sieve shows great potentials as solar absorber and as a catalyser. “All in all, the result is a breakthrough towards the design of an operative filtration process, as a new route for the fabrication of functional materials, and offers commercially attractive efficiencies at a low cost”, says Elbahri.