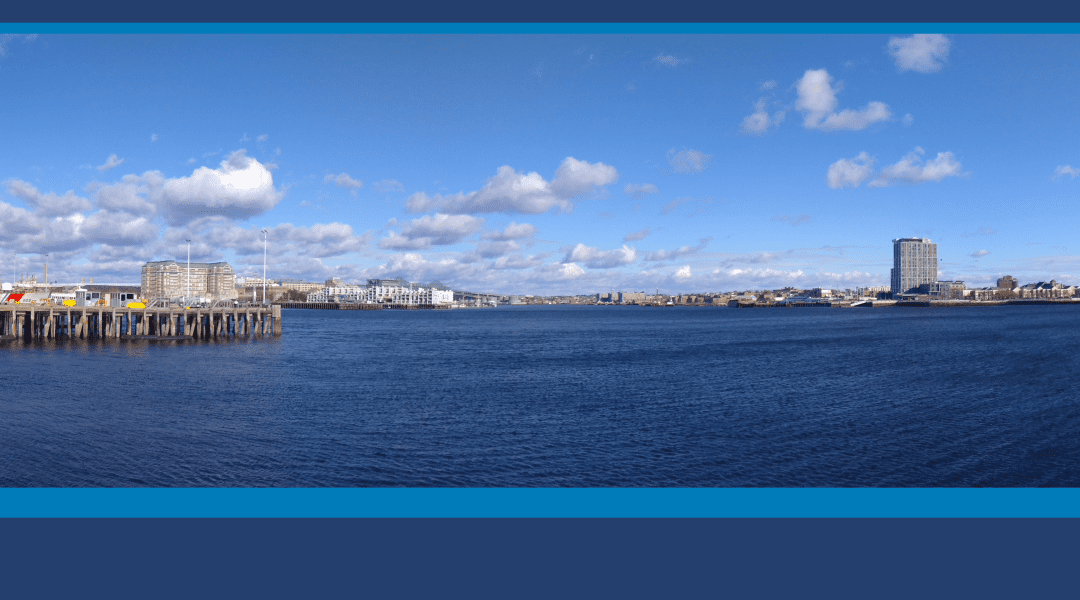 The symposia were grouped into seven topic clusters, each covering a variety of material science disciplines.  The topics clusters were titled:  Broader Impact, Biomaterials and Soft Materials, Electronics, Magnetics and Photonics, Energy and Sustainability, Nanomaterials, Processing and Manufacturing, and Theory, Characterization and Modeling.  A special symposium, titled Frontiers of Materials Research, consisted of four talks on various interdisciplinary topics within the field of material science.

Either by an oral presentation or poster presentation, researchers, professors, post docs, and students highlighted their latest results and gave their input on the newest trends in their fields.  Though the time to ask each presenter questions on his/her talk was limited to a few minutes per talk, the conference had many breaks – including free coffee – in which discussions could take place to further scientific inquiry, networking, and future collaborations. 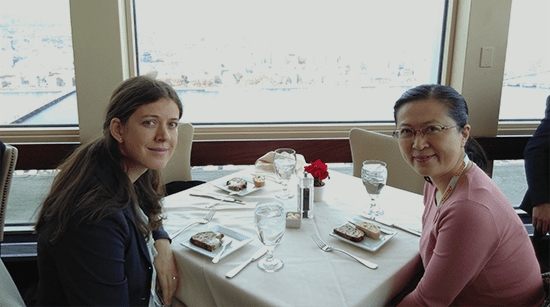 Dr. Anne Pfisterer (Wiley-VCH Editor), and Professor Bin Liu from the National University of Singapore. Prof. Liu is an editorial board member of Macromolecular Chemistry and Physics, and Macromolecular Bioscience.

One of the highlights of the week took place on Monday, November 26, as the MRS celebrated the legacy and impact of Millie Dresselhaus, with a special workshop on nanomaterials and their applications.  The workshop was separated into four sessions, a session on carbon nanotubes, thermoelectrics, graphene and 2D materials, and frontier topics.  Each session consisted of five talks, followed by a panel discussion. This event and the other celebrations throughout the week were a great tribute to the tremendous achievements of Mildred (Millie) Dresselhaus.

Looking forward to the future of material science one can imagine great possibilities in technology and medicine.  At this year’s conference there was a special symposium dedicated to breakthroughs in material science.  Symposium X, titled Frontiers of Materials Research, consisted of four talks on pushing the limits of research and where material science is headed in the future.  On Monday, Margaret Murnane from the University of Colorado Boulder gave a talk titled Capturing Nanoscale Materials Properties Using Tabletop Coherent Soft X-Ray Beams.  This talk focused on the new technology that enables researchers to produce laser beams in the extreme ultraviolet (EUV) and soft x-ray region, all on a tabletop.  With this capability researchers can now study materials like never before, looking at the band structure and other properties, such as magnetic and electric behaviors.

The second talk of Symposium X was given on Tuesday by Younan Xia, from the Georgia Institute of Technology.  His talk was titled Towards Predictable and Deterministic Synthesis of Colloidal Metal Nanocrystals, and focused on the capability to control the properties of colloidal nanocrystals, thus making them ideal for a large range of applications.  By understanding the way these crystals assemble, and learning to control this process, researchers can tailor these materials to their specific needs depending on the device or application.

On Wednesday, Jennifer Lewis from Harvard University gave her Symposium X talk titled Printing Soft Matter in Three Dimensions.  Three dimensional printing has been a hot topic, because researchers are developing new methods that have shown great improvements over the years.  Recent advancements have shown promise for not only new technology, but medical applications too.  The development of biological inks has given researchers the ability to print arbitrary shapes and structures for use in the human body.

The MRS Fall Meeting not only had a scientific program, but was complemented by numerous awards given out to graduates students, postdoctoral researchers, and researchers at an award ceremony that took place on the evening of Wednesday November 29th.  Congratulations to all of the winners! 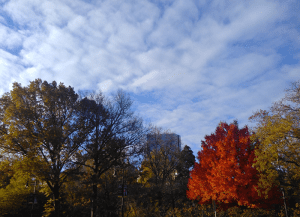 The MRS Postdoctoral Award recognizes postdoctoral researchers who show promise in scientific research, leadership, advocacy, outreach, or teaching.  This year the award was given to two postdoctoral researchers–Michael Saliba, from École Polytechnique Fédérale de Lausanne (EPFL), “for developing a family of stable, reproducible and highly efficient multi-cation perovskites for optoelectronics.”, and Jieun Yang, from Rutgers, the State University of New Jersey, “for creative research in chemically exfoliated 2D materials and tireless dedication to mentoring women in science and engineering.”

The MRS Mid-Career Researcher Award recognizes exceptional achievements in materials research by mid-career professionals.  This year the award was given to Nicola Spaldin, from ETH Zurich, for “creating a new theoretical framework describing multiferroics and for service to the materials community. “  Her award talk was titled  Dynamical Multiferroicity.

The MRS Woody White Service Award honors outstanding individuals who have embodied the Materials Research Society mission, vision, and values for an interdisciplinary community advancing materials science and technology to improve quality of life.  This year’s award was given to Monica Jung de Andrade, from The University of Texas at Dallas, “for her eager willingness to assume multiple leadership roles, her work in engaging international students and postdocs and her numerous activities with The University of Texas at Dallas University Chapter. These contributions have impacted and engaged multiple communities within the Society including students, international members, under-represented members, industrial members and the MRS Membership at large.”

The MRS Materials Theory Award is given out in recognition of exceptional advances to the understanding of the structure and behavior of materials by materials theory.  The 2017 recipient was Glenn H. Fredrickson, from the University of California, Santa Barbara, for “pioneering the development of field-theoretic computer simulation methods and their applications to investigate and design self-assembling polymers and soft materials.”  His award talk was titled Field-Theoretic Simulations – From Advanced Materials to Quantum Liquids.

Every year the MRS recognizes an outstanding recent discovery or advancement that impacts the progress of the field of materials with the MRS Medal.  This year there were two awards given to Joanna Aizenberg and Younan Xia.  Joanna Aizenberg, from Harvard University, was awarded this year’s MRS Medal “for developing new synthesis routes inspired by biological principles for the fabrication of advanced complex multifunctional materials and devices.”  She gave an award talk titled EVERYTHING SLIPS—Design of Novel Non-fouling Materials.  Younan Xia, from Georgia Institute of Technology, was awarded this year’s MRS Medal “for seminal contributions to shape-controlled synthesis of metal nanocrystals with major impact on catalysis, plasmonics and biomedicine.”  He gave an award talk titled Towards Affordable and Sustainable Use of Noble-Metal Nanocrystals in Catalysis and Nanomedicine.

The MRS recognizes the career contribution of a scientist to the understanding of the science of materials through experimental and/or theoretical research by awarding the David Turnbull Lectureship Award.  This year the award went to Sigurd Wagner, from Princeton University, for “groundbreaking contributions to the science and technology of thin film photovoltaics, amorphous silicon, and flexible large-area electronics.”  He gave an award talk titled Materials – From Exploration to Application.

The Von Hippel Award, the highest award handed out by the MRS, is awarded for an individual in recognition of the recipient’s contribution to interdisciplinary research on materials.  The 2017 award was given to C.N.R. Rao, from the Jawaharlal Nehru Centre for Advanced Scientific Research, “for his immense interdisciplinary contributions to the development of novel functional materials, including magnetic and electronic properties of transition metal oxides, nanomaterials such as fullerenes, graphene and 2-D inorganic solids, superconductivity and colossal magnetoresistance in rare-earth cuprates and manganates.”  He gave his award talk titled Glimpses of Six Decades of Research in Materials Chemistry, focusing on his career arch, and the ways in which his research focus changed over the years.

This year’s MRS Fall Meeting was yet another example of the significance and impact of the research in all branches of material science.  The research presented at the MRS lays the foundation for next generation technology and answers many of society’s most pressing issues–including energy, sustainability, and healthcare.  Hopefully, the 2018 MRS Fall conference, next year in Boston, will help us answer many of these questions. Until then, we can look forward to the upcoming MRS Spring Conference in Phoenix in April 2018.