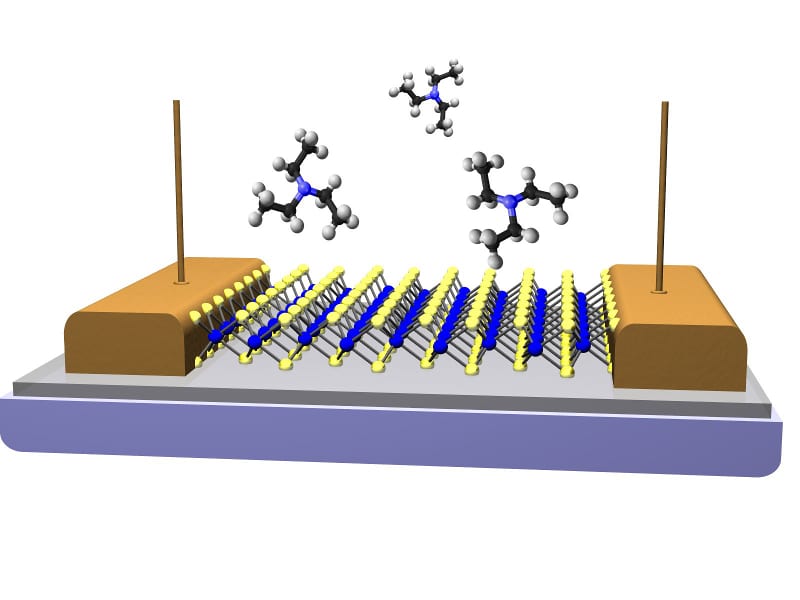 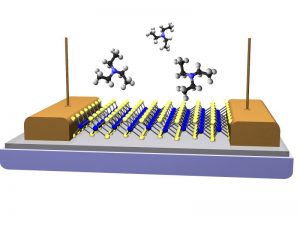 This is a schematic of a vapor sensor fabricated from a single monolayer of MoS2. The conductivity of the MoS2 channel changes as specific types of vapor molecules briefly interact with the surface. Molecules of triethylamine are shown a chemical assoicated with V-series nerve gas agents. Image: U.S. Naval Research Laboratory.

Scientists at the Naval Research Laboratory have developed a vapor sensor based on new monolayer materials that show great potential for future nanoscale electronic devices. NRL scientists have fabricated this sensor using a single monolayer of molybdenum disulfide (MoS2) on a silicon dioxide wafer. They show that it functions effectively as a chemical vapor sensor, exhibiting highly selective reactivity to a range of analytes, and providing sensitive transduction of transient surface physisorption events to the conductance of the monolayer channel. The high surface-to-volume ratio of such new two-dimensional materials is a significant asset for vapor sensor applications—these materials must exhibit a rapid and selective response to a range of analytes (determined by the character of surface atomic sites), sensitive transduction of the perturbation to the electrical resistance of the channel, and rapid recovery upon removal of the vapor.

Much work has previously been done in developing carbon nanotubes as sensors. The carbon nanotubes are very responsive, but not as selective as they need to be unless they are chemically functionalized, which adds complexity and expense to the manufacturing process. Researchers have also looked at graphene, a single layer of carbon atoms in a honeycomb lattice, as a vapor sensor. However, graphene shows a relatively weak response to the various analytes and is not very selective. It also responds to water vapor, which makes it less desirable as a sensor, since water vapor is found everywhere. NRL’s Dr. Berry Jonker notes, “You don’t know if it is sensing water vapor or nerve gas. Should I run because the humidity is high, or because there has been a release of sarin?” The MoS2 sensors developed at NRL offer excellent potential because they are both very responsive and highly selective.

The NRL research team tested their two-dimensional MoS2sensors by exposing them to a variety of analyte vapors including common industrial chemicals and solvents, as well as by-products, simulants or precursors for explosives and nerve agents. Their goal was to see how exposure to these analytes impacted the sensor’s ability to conduct electrical charge. They discovered that the presence of a few specific analytes significantly changed the conductivity of the MoS2 channel. The interaction is transient, Dr. Jonker explains—the molecule does not permanently stick to the surface, but briefly resides or interacts with the surface to change the conductivity of the channel, as illustrated in the figure. The substance is very weakly bound through a process called physisorption. As the concentration in the air changes, so does the amount on the surface, and the conductivity changes accordingly. This can be helpful in locating the source of a vapor.

In particular, the MoS2 sensor is sensitive to triethylamine (TEA), a chemical associated with the V-series nerve gas agents. But the NRL-developed sensor does not respond to a lot of common non-harmful chemicals that would otherwise give a lot of false alarms.

The NRL research team has also noted that the polarity of the monolayer MoS2 sensor’s response is typically opposite to that of a carbon nanotube sensor. They present a model for analyte/sensor interaction in which the analyte serves as either an electron donor or acceptor, producing a temporary charge perturbation of the sensor material. So if the two types of sensors were used in combination, then the confidence level of the reading could be significantly increased. Safety officers or warfighters using a sensor that combined the two (carbon nanotubes and MoS2) could work with increased confidence that the sensor is really detecting a given analyte such as TEA, rather than something else.

Other 2D monolayer materials (MoSe2, TaS2, WSe2, NbSe2, MgB2, BN, etc) are likely to offer complementary sensitivities due to different chemical composition and bonding. The NRL research team envisions development of suites of these 2D material sensors and carbon nanotubes with complementary responsivities, integrated with transistor amplifiers fabricated from the same materials, enabling unambiguous identification of a wide range of analytes in a very compact and low power package.