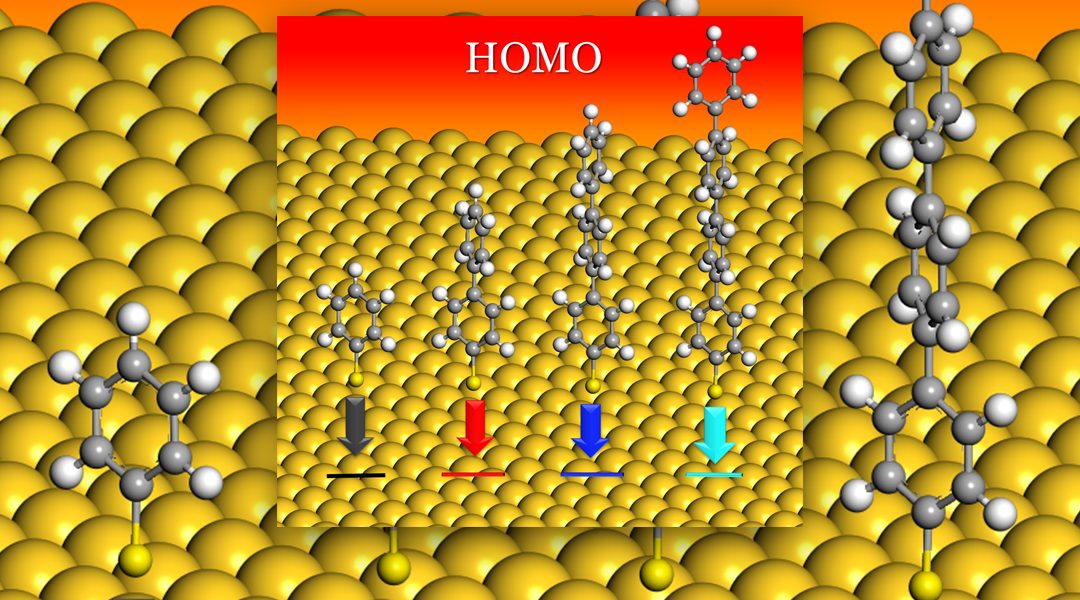 Molecular electronics is a field of nanotechnology aiming at inserting molecular building blocks between metallic electrodes to build electronic components. Attractive chemical systems are Self-Assembled Monolayers (SAMs), which are two-dimensional layers made of highly packed molecules organizing spontaneously and attached covalently at one or both end(s) to the metallic contacts.  For the implementation and optimization of such electronic devices, it is compulsory to have a control over the molecular properties dictating the electronic conduction through the SAMs. In particular, a key property is the energetic alignment between the Fermi level of the electrodes and the frontier electronic levels (HOMO and LUMO) of the SAM-forming molecules.

A central issue in the field is to assess whether any chemical design made to tailor the electronic properties of isolated molecules is retained once the chemical units are introduced in molecular junctions. In this context, quantum-chemical calculations based on Density Functional Theory (DFT) could be very useful to provide a deep understanding of the phenomena taking place at the metallic/organic interfaces and ruling the energetic level alignment.

In a their paper published in Advanced Theory and Simulations, Jérôme Cornil and his colleagues in University of Mons-UMONS report a theoretical study of the energy level alignment of a series of thiolated oligophenylenes of increasing chain size both in SAMs and molecular junctions. Whereas the HOMO level, which is controlling the conduction in the junction, strongly evolves with chain size in the isolated molecules (as expected from the increase in the conjugation length), our calculations show that the energy variation is significantly reduced upon adsorption on metallic electrodes. This points to the occurrence of a pronounced pinning effect implying that the strong hybridization between the orbitals of the atoms of the substrate and those of the anchoring group of the molecules reshuffles the electronic structure of the molecular building blocks. Interestingly, this pinning effect is found to be robust against changes in several molecular parameters (anchoring site, tilt angle) and to have a different origin depending on the actual degree of coverage of the surface.

The take-home message of this work is that design rules applied to isolated molecules can be wiped out in molecular junctions and thus interface engineering is required to preserve them. This study could stimulate additional experimental and theoretical measurements to further shed light on the complex issue of energy level alignment at metal/organic interfaces.