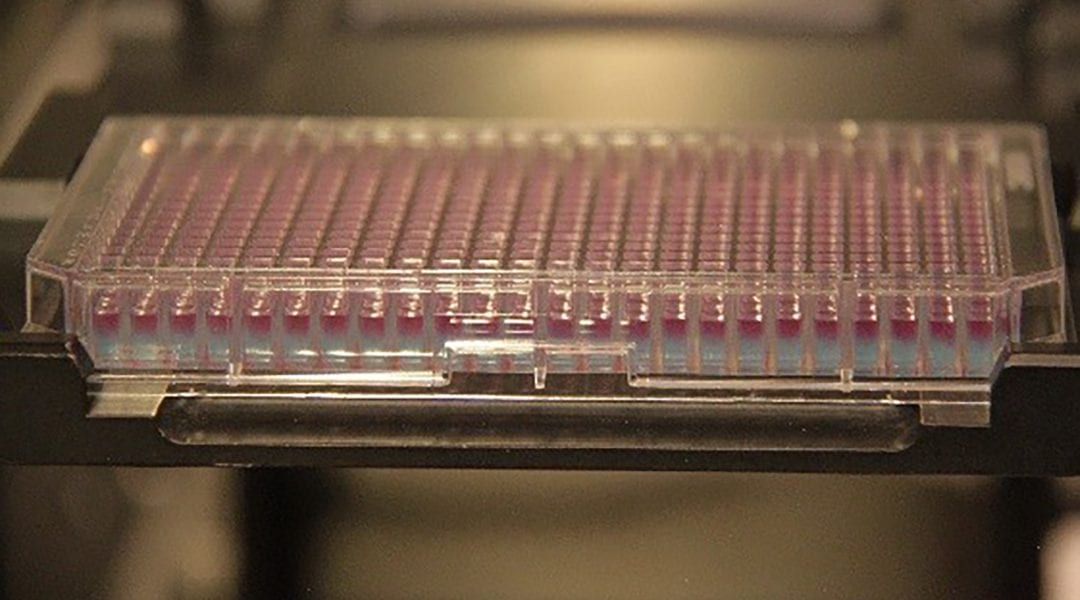 To enhance recombinant protein synthesis, researchers from China use microfluidics to fabricate hydrogel particles that transition between a shrivelled-up and swollen state in response to changes in temperature.

At temperatures above 34 degrees Celsius, the hydrogel beads collapse, and when the temperature is decreased to below 34, they expand again filling with solution.

Plasmids in solution are absorbed into the hydrogel as it swells at lower temperatures, and become encapsulated within the porous matrix.

“Hydrogen bonds between plasmids and polymer chains also help to stabilize the structure to some extent,” says Professor Yuan Lu of Tsinghua University.

Upon heating to 37 degrees Celsius, the hydrogels crumple to extrude the plasmids to the surface where they are clustered and readily accessible to the reagents and transcription and translation machinery required for protein synthesis when added to cell extracts.

In work recently published in Small, the team report that this microgel system enables faster protein synthesis that continues for longer periods than in solution, leading to doubling of the protein yield.

“Protein synthesis became much more persistent and effective than the conventional cell-free solution system, especially at low plasmid concentrations,” says Lu who is a corresponding author of this study.

To produce recombinant protein, researchers traditionally introduce the DNA template into actively growing bacterial, insect or mammalian cells. The benefits of moving this production line into cell-free expression systems include easier and faster protein synthesis that is amenable to miniaturization and automation, enabling applications in high throughput screening.

Materials ranging from aqueous droplets to lipids and polymers have been used to mimic subcellular membranes encapsulating cell-free protein synthesis to shield the process from enzymatic degradation. Hydrogels are biocompatible and can be easily controlled. Their structure is temperature responsive because the hydrogel monomer has parts that repel and parts that attract water molecules, explains Lu.

He says that researchers can easily control the reaction conditions to optimize cell-free reactions in their microgel system with a wide range of adjustable physical and chemical properties.

“They can also react to the tiny external stimuli, thus displaying a promising future as a bio-responsive material” Lu says.

The authors believe that this microgel system provides inspirations for constructing a configurable artificial cell — a more complex structure with multiple compartments could be achieved for metabolic processes and more complicated functions in the future.