Microfluidics and Macromolecules topical issue published in Macromolecular Chemistry and Physics and guest-edited by Sebastian Seiffert. 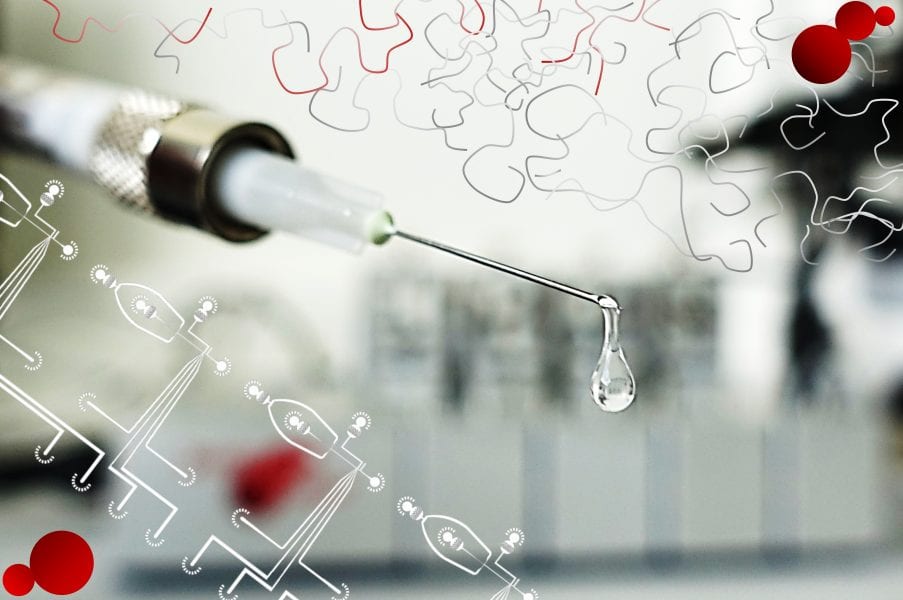 Microfluidics is the art of creation and manipulation of small portions of fluids, usually realized by flow within sub-millimeter-scale channels. It offers a great tool for advanced analytics and for the controlled synthesis of macromolecular materials.

The latest issue of Macromolecular Chemistry and Physics showcases the state-of-the-art and future potential of microfluidics technology in macromolecular science. Guest-edited by Sebastian Seiffert, the issue is a collection of contributions from scientists around the world, leaders in this research area.

“In 2011, twelve M.I.T. researchers issued a white paper on the trend of “convergence”, referred to as a merger of life, physical, and engineering sciences.  Mapped to our field, macromolecular chemistry and physics appears to be nothing less than a natural realization of this synergy.  In the recent past, our discipline has advanced to creating an arc from (macro)molecules to materials, whereas at present, the next step aimed for is that from materials to systems” states Sebastian in his Editorial.

“Realization of this endeavor requires macromolecular materials to be processed with exquisite control, and a particularly powerful variant of gaining such control is the method of microfluidics. In this respect, it only appears logical to shed a special focus on the convergence of this methodological approach with the art of macromolecular chemistry and physics; this is what this themed issue is targeted at.”

We hope you will enjoy reading it!

Read contributions to the Microfluidics and Macromolecules topical issue here.

Find below selected contributions accessible for FREE until April 30, 2017:

Microrobots show their true colors
The ongoing search for life on Venus
Zafra Lerman: Scientific exchange can promote peace
What can Shakespeare teach us about climate action?