From metal to insulator and back again

Recently researchers discovered that some metals stop being metallic under pressure. 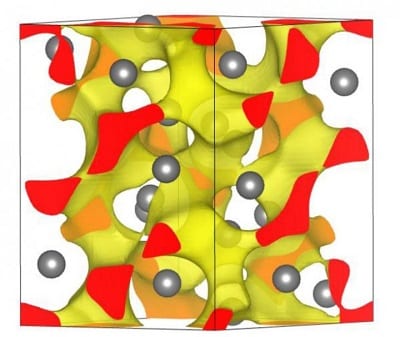 Insulators can be pushed across the divide from insulator to metal by tuning their surrounding conditions, particularly by placing them under pressure. It was long believed that once such a material was converted into a metal under pressure, it would stay that way forever as the pressure was increased.

But it was recently discovered that certain groups of metals become insulating under pressure – a remarkable finding that was not previously thought possible. 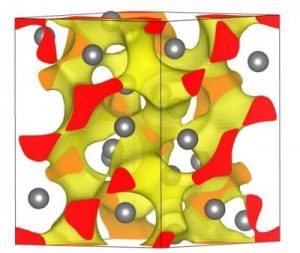 View of the localized electrons in the unusual insulating state of Li under pressure. Credit: Russell Hemley and Ivan Naumov

For example, lithium goes from being a metallic conductor to a somewhat resistant semiconductor under around 790,000 times normal atmospheric pressure (=80 GPa) and then becomes fully metallic again under 120 GPa. Sodium enters an insulating state at pressures of 180 GPa. Calcium and nickel are predicted to have similar insulating states before reverting to being metallic.

“The principles we developed will allow for predictions of when metals will become insulators under pressure, as well as the reverse, the when-insulators-can-become-metals transition,” Naumov said.

The onsets of these transitions can be determined by the positions of electrons within the basic structure of the material. Insulators typically become metallic by a reduction in the spacing between atoms in the material. Hemley and Naumov demonstrated that for a metal to become an insulator, these reduced-spacing overlaps must be organized in a specific kind of asymmetry that was not previously recognized. Under these conditions, electrons localize between the atoms and do not freely flow as they do in the metallic form.

“This is yet another example of how extreme pressure is an important tool for advancing our understanding principles of the nature of materials at a fundamental level. The work will have implications for the search for new energy materials,” said Hemley.