Through the ambitious Moonrise project, German researchers are looking to melt Moon dust in order to produce usable building materials on the Moon.

Hype and interest in the Moon is growing again, partly thanks to a very special anniversary coming up this weekend.

On 13 September 1959, nearly 60 years ago, the Soviet Union’s Luna 2 mission successfully reached the surface of the Moon. It was the first human-made object on the moon. But ten years and many successful and unsuccessful attempts later, the U.S. Apollo 11 was the first mission to land human beings on the Moon, on 20 July 1969, exactly 50 years ago. This marked a major step forward in human endeavor and achievement.

Until now, there have been six crewed landings between 1969 and 1972 and numerous uncrewed landings—not only from the U.S. and Russia, but also Japan, Europe, India, and China. All crewed and uncrewed soft landings had taken place on the near side of the Moon, until 3 January 2019, when the Chinese Chang’e 4 spacecraft made the first landing on the far side of the Moon.

On 11 April 2019 the first Israeli mission—and the first privately funded—lunar landing attempt crashed on the surface.

India intends to continue with efforts with a space station program and possibly a crewed lunar landing. China is planning to land and return lunar soil samples by 2020. Russia announced plans to send cosmonauts to the Moon by 2025 and establish a permanent robotically-operated base there in 2027–2032. NASA plans to send people to Mars from a lunar base.

However, the cost of flights and transportation to the Moon are enormous; 1 kg of loading capacity costs approx. 700 000 Euros. Many suggest that it would be more feasible to source and manufacture the required infrastructure and devices for such purposes directly on the Moon using available resources.

This is where Moonrise technology comes in: “We want to bring a laser system to the Moon, which is supposed to melt Moon dust, the so-called regolith. We would thus take the first step to take additive manufacturing, that is 3D printing, to the moon”, explains Niklas Gerdes of the Laser Zentrum Hannover (LZH).

Scientists from the Institute of Space Systems (IRAS) and LZH want to prove that a laser system, weighing no more than 3 kg, with the volume of a large juice package, can be used to convert local raw materials on the Moon into versatile structures.

The team wants to melt regolith on the lunar surface in a controlled manner using their laser system. After cooling, the material solidifies into a predetermined shape, which is then suitable, for example, as building materials for the “Moon Village”, a proposed global village on the Moon that could be used as an outpost in space. The targeted melting into predefined structures is monitored and recorded with high-resolution cameras, and findings from preliminary experiments will have a fundamental impact on exploratory missions.

The opportunity to fly their technology to the Moon in 2021 with the first mission of the Berlin-based new space company, PTScientists, offers the researchers the chance to test their pioneering technology under real conditions. If the experiment succeeds on the Moon, the Moonrise process can be scaled up to produce larger structures. Thus, whole infrastructures, such as foundations, paths, and landing surfaces, could be built using this new 3D printing technology. 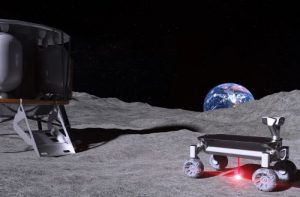 The project has been running for almost nine months and initial results are promising. The laboratory setup has been adapted for space, common laser hardware identified, and the optics designed and tested. Materials that the scientists produce and use for the tests are becoming more and more similar to the regolith on the moon. Current efforts are being spent toward adapting the laser to the load compartment of the lunar vehicle, the so-called rover. The laser will be integrated into a tunnel at the bottom of the rover and the entire system tested for its space compatibility because on its journey to the Moon, the laser system must withstand violent shocks and massive temperature differences.

Stefan Linke from IRAS explains: “The planned direct proof that we are able to process lunar regolith with already available hardware components is crucial for the planning of future missions. Thus, larger and more sustainable projects on the surface of our cosmic neighbor are becoming possible.”

Electronics that Imitate Life: A Sensing Robotic Hand
Oded Rechavi: “Do anything in your own style, the way you want to do it”
Earth Day turns 50
Largest known comet from Oort Cloud captured by Hubble