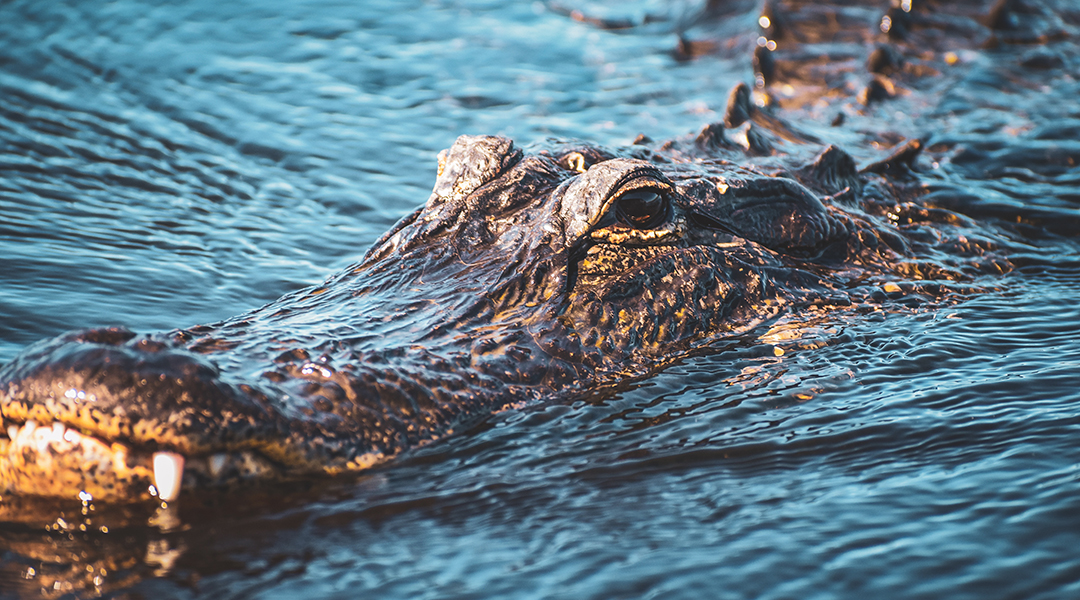 “Because most living organisms have evolved toward the optimized way for each of their life, we can easily learn from nature and apply the versatility for newly developed technology,” said Kilwon Cho, professor in the Department of Chemical Engineering at Pohang University of Science and Technology in Korea. “We consider ourselves experts in integrating […] nature into developing nature-inspired technology.”

Inspired by the uniquely sensitive skin of a crocodile, Cho and his team recently described the development of a stretchable pressure sensor that could be used in wearable devices for applications such as prosthetics, soft robotics, and human-machine interfaces.

Current mechanical sensors have limitations, including poor stretchability and subsequent loss of sensitivity under deformation, which are important features to optimize if the sensors are applied in wearable devices or soft robotics where they’ll see a lot of movement.

“As we were thinking about developing better pressure sensors, we remembered a documentary about the ability of crocodiles to detect even the slightest vibrations in water,” said Cho. “[Therefore,] we started to investigate the sensory organs of the crocodile’s skin.”

These pressure receptors in crocodile skin have a dome shape, which allows a higher sensitivity compared to flat receptors because they are more easily deformed when mechanical pressure is applied.

The receptors in a crocodile’s skin can sense mechanical pressure even when the skin deforms because they are surrounded by hinge-like structures that “absorb” this deformation, keeping the dome-shaped receptors in a similar, non-deformed shape as if the skin is relaxed.

Cho and the team decided to re-create these microscopic, dome-shaped mechanical receptors separated by “wrinkles”, mimicking the hinges in the crocodile skin to develop a sensor capable of sensing pressure even under strain.

In the current study, Cho and his team built their sensor using a film of stretchable and deformable silicon-based organic polymer called polydimethylsiloxane, on which they made “bumps” in microdome shapes to mimic the surface of the crocodile’s skin. They then embedded the polymer structure with silver nanowires, which serve as the conductive component.

This way, when a mechanical pressure deforms the microdomes, the silver nanowires are disarranged and create an electrical current read by an electrode at the top of the structure. To make the sensor capable of detecting mechanical pressures even when under tensile strain, the team also added structure wrinkles in between the microdomes by repeatedly stretching and releasing the material.

When the team tested the sensor, they observed that the pressure sensitivity remained almost unchanged when the film was stretched in different directions.

“The surface wrinkles presented at the interspaces between microdomes expand first under strain and effectively minimize the strain applied onto [them],” said Seung Goo Lee, assistant professor in the department of Chemistry at the University of Ulsan in Korea and co-lead author of the study. “Therefore, because [the sensor’s] microdomes experience negligible local tensile strains under stretching, our pressure sensor exhibits strain-independent pressure sensing performance.”

The team also observed that their sensor could resist repetitive mechanical pressure without deforming, breaking, or changing its sensitivity. “Our sensor is fully composed of the elastomeric polymer polydimethylsiloxane, so it has mechanical robustness under repeated vertical pressures and tensile strains,” said Lee.

In application experiments, the team observed that their sensor could detect the different weights of two different-sized coins, as well as sense small changes in air pressure, and when mounted onto a finger or on the back of a hand, it could detect the touch of another finger.

To see how close to their biological inspiration this sensor function came — or probably just for fun — the team mounted their sensor onto a plastic crocodile and submerged it in water. There, they observed that their sensor could detect small waves, just as crocodiles do.

To make this sensor more robust, the team is planning to include various other sensing functions, such as temperature, chemical, and light sensitivity.

“We have developed diverse types of scientific technologies mimicked by the surface of plants and animals including the self-cleaning of lotus and rice leaves, the water collection of cactus spines, the tactile sensing of human fingerprints, and this work,” said Cho. “It will be a great opportunity for researchers to explore interesting functions in nature and mimic them for their own research.”