Massive shoreline hints at an ancient ocean on Mars

The 3.5-billion-year-old shoreline provides evidence of an ancient ocean in Mars' northern hemisphere as well as sea-level rise. 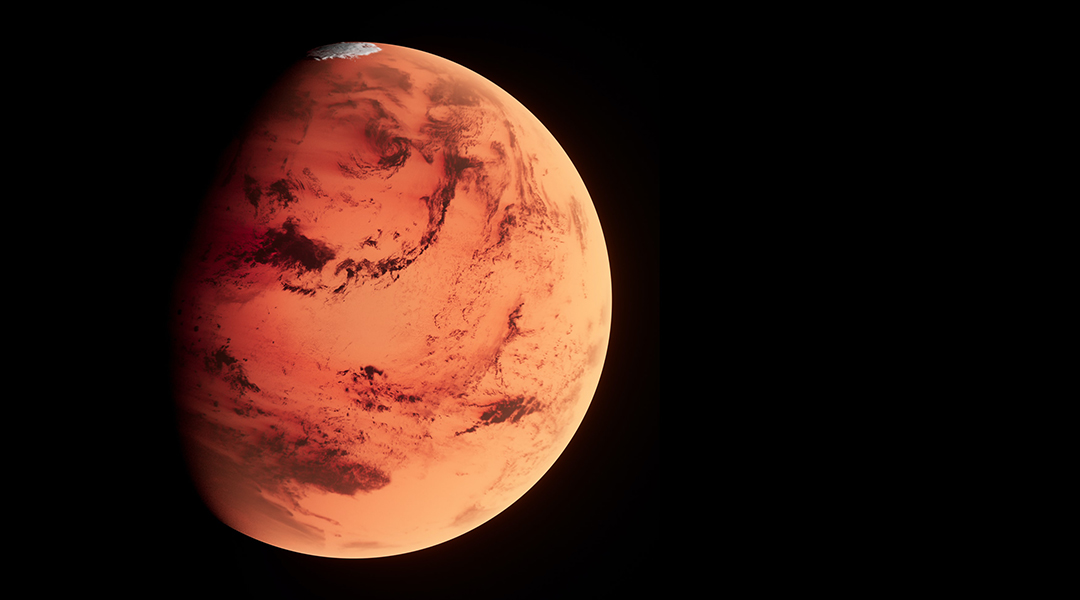 Though we see Mars today as a cold, barren, arid desert, there is a wealth of evidence that the Martian surface once ran deep with liquid water oceans.

The fact that around 4 billion years ago the Red Planet enjoyed a warm and wet climate not dissimilar to Earth has fueled the scientific investigation of the planet as rovers and other robot missions search for signs that the planet once harbored life.

What has been less forthcoming is evidence that oceans of liquid water once existed in the northern hemisphere of Mars, leading to a heated debate that the Red Planet’s north was as wet and warm as its south.

An ancient ocean on Mars

A new set of topographic maps featured in the Journal of Geophysical Research: Planets presents new evidence for an ancient ocean.

The team behind the study found evidence of a roughly 3.5-billion-year-old shoreline with sedimentary accumulation at least 900 meters thick in an area in the northern hemisphere of Mars. This substantial build-up of sediment covers hundreds of thousands of square kilometers and implies the existence of a massive ancient ocean.

The paper also offers the strongest argument yet in support of the idea that Mars once experienced sea-level rise that is consistent with an extended warm and wet climate.

“We discovered that a well-studied region of Mars called Aeolis Dorsa contained a kilometer-thick stack of sedimentary rocks that accumulated at the margins of an ocean-sized body of water that occupied Mars’ low northern hemisphere over three billion years ago,” said the study’s lead author and assistant professor of geosciences at Penn State University, Benjamin Cardenas.

With regard to the fact the findings point to an ocean in the northern hemisphere, Cardenas is very clear about the implications for planetary scientists.

“It’s a big claim! It’s one that people have presented evidence for and against over the last thirty years,” he explained. “It’s also difficult to model an early Mars atmosphere that is warm enough, though this problem is not uniquely Martian.”

Cardenas pointed out that most of the studies surrounding ancient shorelines on Mars thus far have tried to look for erosional remnants of an ocean shoreline, such as steep, wave-cut cliffs. This approach neglects somewhat very old erosional features that are difficult to understand because the surface of Mars has been in a state of erosion for the last 3 billion years, and old features may become overlaid.

“Here, we analyzed sedimentary rocks, which should be a much more reliable record of Mars’s history,” Cardenas added.

The data used by the team was collected from orbit by NASA and the Mars Orbiter Laser Altimeter, which was mapped using software developed by the United States Geological Survey.

With the resultant high-resolution topographic datasets, the team could do sedimentary geology from the satellite data, which revealed over 6,500 kilometers of fluvial ridges that the team grouped into 20 systems, indicating the existence of ancient river deltas.

“Branching fluvial ridges, at Aeolis Dorsa at least, are the result of ancient river deposits that have been eroded out of flat-lying sedimentary rocks that accumulated on a coastal plain on the tops of river deltas — where rivers meet standing water, like the Mississippi River delta,” Cardenas said. “There is one ridge in the region that is NOT branched and is over 900 kilometers long. The length and lack of branching are very unusual for a river deposit, but entirely normal for a submarine-channel deposit — a channel running under the ocean!”

The length of this feature informed Cardenas and colleagues that they were not looking at standing water in small lakes, rather this must have been an ocean-sized body of water to have supported a submarine channel that long.

The deltas discovered by the team were so large and so spread out that it came as something of a shock to Cardenas and the team.

“We were expecting to find evidence that the fluvial ridge networks were flowing into ancient crater lakes. It just didn’t match the data,” the Penn State scientists said. “The deltas were too big, the ancient flow directions were more spread out rather than directed into central areas, and the 900 km ridge was just too long!”

The most important finding made by the team is the fact that the river deltas they uncovered are all of different ages. Cardenas said this shows that Aeolis Dorsa was once similar to the U.S. Gulf Coast, where the deposits of older rivers and floodplains are continuously being buried by the modern rivers and floodplains.

“Fluvial ridges occupy over one kilometer of topography currently, but the ancient rivers can only build river deposits like that in very flat settings as rivers in steep settings mostly remove sediment instead of depositing it!” Cardenas continued. “So, when we see fluvial ridges spanning so much topography, we know the topography we’re looking at now has been very eroded and is cutting through coastal deposits of different ages.”

The team was also surprised to find just how much sea level rise was hidden within the stack of river deltas they discovered.

This much sea level rise indicates to Cardenas that a significant amount of water was initially stored in the southern hemisphere, which is more elevated, before making its way into the northern hemisphere.

The Penn State researcher will now attempt to explain how this extreme sea level rise actually came about which could indicate how dynamic the oceans of Mars were in its distant past.

“Understanding those details would help us better understand Mars during this interesting period in its history,” Cardenas added.

With regards to what this discovery means for the idea that Mars once harbored life, Cardenas is cautious but believes that this region of the Red Planet would be a good choice to search for evidence of it.

“I am not a biologist, but an ocean certainly makes Mars seem warmer and more habitable,” he concluded. “Aeolis Dorsa would be a great place to go, though with so much topography this region could make for a dangerous landing.”

Pioneers in Science: Jagadish Chandra Bose
Women in STEM you should know
Artificial chemist 2.0
New material is a game changer in radiative cooling