Seeking life on Mars: What you need to know about the Perseverance mission

The Perseverance rover will explore the Martian Jezero Crater and collect the first rock samples from the Red Planet. 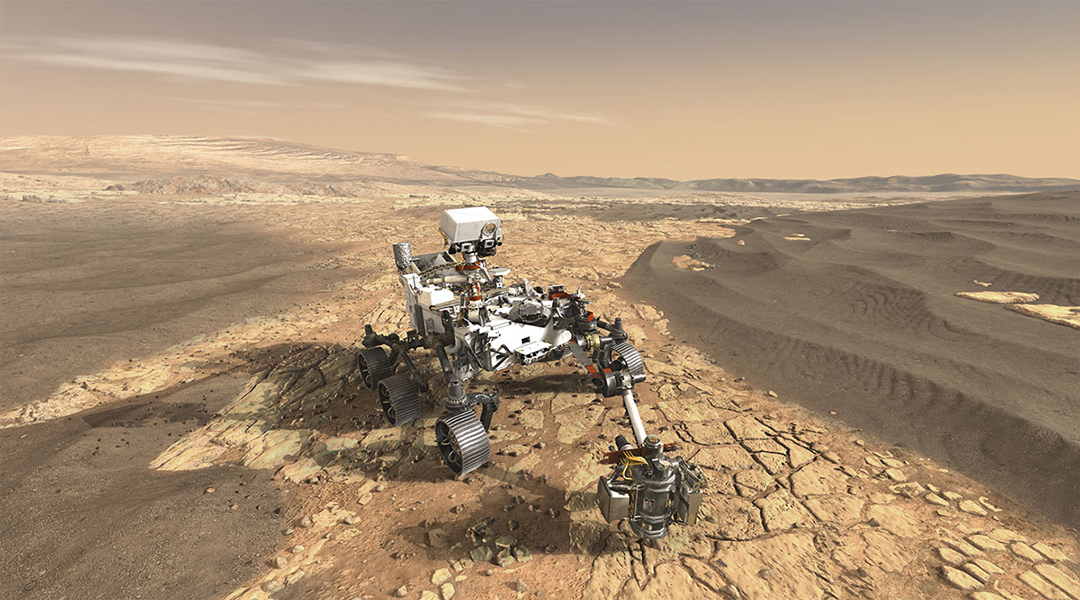 Tomorrow, NASA’s Perseverance rover will touch down on the Red Planet and the hype around the mission is building. Launched last summer, the endeavor aims to discover signs of ancient life on Mars and will collect samples of rock and regolith for a possible return to Earth.

The mission is part of a legacy of explorations that began in the early 1960’s, with the first ever close-up image taken by the Mariner IV spacecraft in 1966. Though the aim of this program has been to gain a better understanding of Mars, it has been driven by the relentless question: did life ever exist on our neighboring planet?

Roughly 3.5 billion years ago, Mars and Earth were much more similar, with evidence suggesting Mars may have been warmer and wetter than it is today. It was during this time frame on ancient Earth that scientists can provide proof of microbial life. If Mars and Earth were once similar, then perhaps microbes were also present in its ancient past, and may still exist in other regions even now.

While discovering life would be a miraculous development, even if Mars is devoid of past or present life, there is still a lot to be gained from missions to its surface.

“We ourselves might become the ‘life on Mars’ should humans choose to travel there one day,” wrote NASA officials. “Meanwhile, we still have a lot to learn about this amazing planet and its extreme environments.”

During its harrowing landing, the Perseverance rover will initially plunge through the Martian atmosphere at more than 12,000 mph (about 20,000 kph), after which the rover will (hopefully) land softly at Jezero Crater — a 45 kilometers wide depression in the planet’s surface just north of the equator.

Scientists believe this once flooded region is the best chance of finding evidence of ancient life, and was selected through a pain-staking process from 60 other candidate locations. It was ultimately chosen due its age and the presence of some intriguing geological features that “tell a story of the on-again, off-again nature of the wet past of Mars”.

The area, which scientists believe formed over 3.5 billion years ago, was once host to a river delta and lake, which formed as a result of an ancient meteorite impact within the Isidis basin. Though the ancient inflow river has long run dry (visible in the top left portion of the image below), evidence of its existence was first provided by NASA’s Mars Reconnaissance Orbiter CRISM instrument, which also identified possible clay minerals in the area that only form in the presence of liquid water — like ancient river beds on Earth.

“On Earth, scientists have found such clays in the Mississippi river delta, where microbial life has been found embedded in the rock itself,” wrote NASA officials. “This makes Jezero Crater a great place to fulfill the Mars 2020 mission’s science goal of studying a potentially habitable environment that may still preserve signs of past life.”

Organic matter deposited by the now dry rivers could be found by collecting samples of rock and soil from the shoreline and lake bed; signs of which would be kept in the geological record in the form of biosignatures — objects, substances and/or patterns whose origin specifically requires a biological agent.

Evidence from previous orbiting spacecraft missions also suggest that the rocks along the shoreline may be composed of carbonates, which are rare on Mars but common on Earth and are often associated with ancient organic matter, like coral reefs. These samples will also provide scientists with a better understanding of how the region formed and changed over time.

A continuing legacy of Martian exploration

Thus far, there have only been eight successful landings on Mars made by NASA — made between 1976-2018 — and two by the Soviet Union in 1971 and 1973. In the last month, two more arrivals have made it to orbit. The United Arab Emirates’ Hope spacecraft, which started orbiting the planet on 9 February, and a day later, China’s Tianwen-1 mission.

Perseverance is a successor to NASA’s Curiosity rover, the agency’s flagship mission to Martian surface that was launched back in 2012. A roaming laboratory sent to the Gale Crater (a dry lake bed about 3,700 kilometres from Jezero), Curiosity was the largest and most capable rover ever sent to Mars, providing an incredible amount of data in its nine years (and counting).

It’s aim was to determine whether Mars was ever capable of supporting microbial life, and early in its mission, it found chemical and mineral evidence to supports the hypothesis that Mars once had habitable environments. Perseverance aims to take the next step in this mission, and is the first lander to actively hunt for hard evidence of ancient life.

Where other missions did not collect and store samples (only analyzing them), a unique feature of the Perseverance rover is its ability to store rock core and soil samples. The rover contains 38 empty tubes, which it will fill and deposit at select locations along with duplicates kept in its own storage compartment.

A future mission could retrieve and bring them back to Earth for more detailed study — NASA in collaboration with the European Space Agency (ESA) hopes this could happen as early as 2031.

That being said, Perseverance does contain some sophisticated scientific equipment of its own for analyzing materials during its mission. For example, the rover’s “Scanning Habitable Environments with Raman and Luminescence for Organics and Chemicals” (or SHERLOC) is the first instrument on Mars to use Raman and fluorescence spectroscopies, common techniques used in chemical analysis.

Along with its ability to drill for rock samples and analyze their chemical compositions, Perseverance also carries technologies that might help further the exploration of Mars as well as prepare future human visits.

In this respect, it is carrying an important instrument called the “Mars Oxygen In-Situ Resource Utilization Experiment”, or MOXIE for short, which can create oxygen (O2) from the carbon dioxide(CO2)-rich Martian atmosphere. It does this through an electrochemical process in which CO2 molecules are split into O2 and carbon monoxide (CO). According to NASA, the O2 is analyzed for purity before being vented back out to the Mars atmosphere along with the CO and other exhaust products.

Using natural resources already present on Mars, scientists hope to provide sustainable life support and fuel sources for future human exploration. If scaled up, instruments like MOXIE could help humanity get a foothold on the Red Planet.

In another first, the Ingenuity Mars Helicopter — attached to the belly of Perseverance — will make a few test flights during its mission, and will contribute to determining a safe route for the rover. This will make it the first controlled flight on another planet, and could make aerial explorations, perhaps via drones, a possibility in the future.

If still operating after one Martian year (roughly 687 Earth days), Perseverance will then leave the Jezero Crater and will head out into the surrounding plains, called Nili Planum. This is another ancient geological area, created when an asteroid collided with Mars nearly 4 billion years ago. Scientists suspect that rocks in this area may have been blasted up from the planet’s mantel as a result of this impact, which would give them an easy means of observing materials of the planet’s interior — something that has also never been done before but would provide invaluable information on how the planet was formed and its geological structure.

This mission has been decades in the making, and if all goes according to plan (knock on wood), touchdown will occur tomorrow, Feb. 18 at 3:55 p.m. EST. NASA will be providing live coverage of the big event, starting at 2:15 p.m. EST, which you can watch directly via the space agency.