Machines with a Sense of Smell

German researchers are developing a technology that produces cell-based biosensors that could give machines a sense of smell.

Our sense of smell has many functions, for example, it facilitates our choice of partner, helped us identify dangers in the wild, smell fire, and determine if food has spoiled. On average, humans can distinguish between 2,000 and 4,000 different smells, although people with sensitive noses, like wine tasters, can recognize up to 10,000 fragrance nuances.

Currently, the Fraunhofer Institute for Manufacturing Engineering and Automation IPA in Stuttgart, Germany, is developing a new platform technology that automatically produces cell-based biosensors, which could give machines a sense of smell. The platform is initially validated on a product of the Californian start-up Koniku.

IPA project manager Martin Thoma sums up the innovation: “We are basically developing a generic tool that will enable cell-based biological sensors for industrial use in the medium term.“ Biology and technology merge. 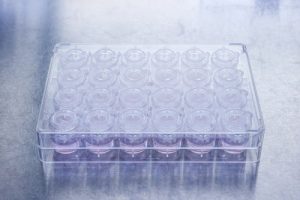 To determine the right odour receptor for a specific application, several thousand receptors and their combination must be screened. Image source: Fraunhofer IPA.

In order to enable the targeted development of an economically usable product, the research institute will develop a screening process for receptor selection and the reliable automated production of so-called transfected cells, i.e., cells in which foreign DNA or RNA is integrated.

Koniku has been cultivating such cells for several years now, developing olfactory receptors, which are introduced on small autonomous optical selection units. The cells can be kept alive and are functional for an extended period of time and used to detect tiny particles from their environment.

The goal of this project is to manufacture economically usable cell-based sensors, and while strides have been made, the researches admit that there are still many unanswered questions. To determine the right olfactory receptor for a specific application, several thousand receptors and their combinations must be screened. For this process to become economical, a platform is needed that makes it possible to automatically modify cells, i.e., transfect them and then examine them for their specific reaction to smells and tastes.

With such a transfection and screening platform, it would be possible to modify the cells very quickly for different olfactory stimuli and thus to open up other areas of application, such as medical diagnostics.