Fluorescent carbon dots can be made by plasma pyrolysis and used as printer ink. 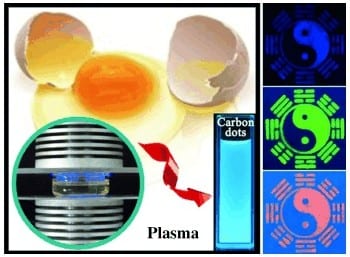 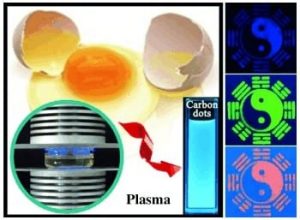 Luminescent carbon nanoparticles based on carbon exhibit advantageous optical properties. They are also biocompatible, and therefore better suited for imaging procedures in the biosciences than metal-based semiconductor quantum dots. A variety of processes have thus been developed to make these miniature objects known as carbon dots or C-dots. Chinese researchers have now introduced a new method in the journal Angewandte Chemie, by which C-dots can be produced particularly quickly and inexpensively. In addition, they have demonstrated the use of these luminescent dots as printer ink.

The new process is based on plasma-induced pyrolysis. A plasma is a gas whose components have been partially or completely separated into ions and electrons. This plasma is highly reactive and energetic; its uses include plasma welding, for which it serves as the heat source. A team led by Su Chen at Nanjing University of Technology directed a special plasma beam onto a small amount of egg yolk or egg white in order to carbonize the material. Within a few minutes, they formed C-dots with a yield of about 6%.

The C-dots obtained from the egg yolk have a crystalline structure and a diameter of about 2.2 nm; those from the egg white are amorphous and measure about 3.4 nm. They contain mainly graphitic structures. Oxygen and nitrogen atoms are also bound to the surface in various ways, allowing for good solubility in a broad range of aqueous and organic solvents. The C-dots are not sensitive to acids or bases. Under UV light, they fluoresce bright blue. It is presumed that the luminescence comes from passivated surface defects that “trap” the excitatory UV light like antennae.

The researchers were able to follow the pyrolytic process by means of thermogravimetric analysis and IR spectroscopy: it includes the uncoiling and breaking down of proteins as well as various chemical reactions. Towards the end, primarily carbon dioxide, ammonia, and water are released. “This process is not limited to eggs,” explains Chen, “it works with many inexpensive natural carbon sources, including sugars.”

The scientists fabricated inks based on the luminescent C-dots and printed glowing patterns on a variety of surfaces by both inkjet and silk-screen printing processes. The addition of small amounts of organic dyes or semiconducting quantum dots allows the color of the ink to be varied. “Such fluorescent inks may be useful in optoelectronic applications,” says Chen, “for example in forgery-proof labeling and optoelectronic sensor applications.”