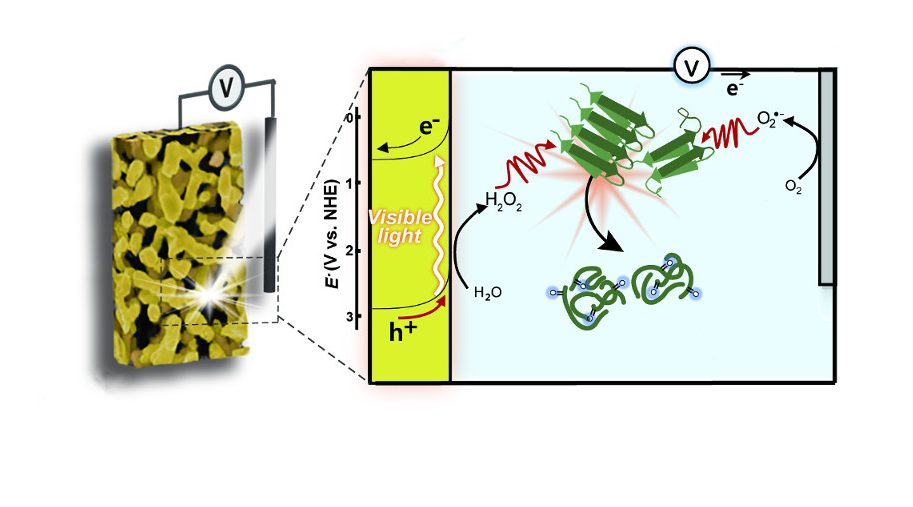 Alzheimer’s disease (AD) is the most prevalent neurodegenerative disease, affecting more than 15% of the population aged over 65 worldwide. The major pathological hallmark of AD is the accumulation of amyloid plaques in the brain, which are composed of β-amyloid (Aβ) peptides.

The Aβ peptide monomers are prone to self-assemble into insoluble, extremely stable β-sheet-rich aggregates. Because Aβ peptides start to aggregate long before the onset of AD symptoms, many efforts have been made to reverse AD pathology by clearing amyloid deposits. However, high stability of amyloid aggregates makes it challenging to clear amyloid deposits using chemical or biological means.

A team led by Professor Chan Beum Park at Korea Advanced Institute of Science and Technology (KAIST, Republic of Korea) has developed a bismuth vanadate (BiVO4)-based photoelectrode platform for dissociating Aβ aggregates and reducing amyloid-induced cytotoxicity. BiVO4 is a promising oxide material that has been widely used in the fields of energy conversion and environmental science. It is now demonstrated that in a photo-electrochemical configuration (that is, under illumination and with an external bias applied), BiVO4 promotes the radical-mediated photo-oxidation of Aβ assembles into non-toxic, soluble aggregates therefore reducing Aβ-induced cytotoxicity.

The authors commented “Medical use of photoactive materials and light is an attractive strategy because of their temporal and spatial controllability. Recent advances in optogenetics have opened a new avenue to treat neurodegenerative diseases by delivering light energy directly into the brain, which hints at the future development of a photoelectrode-based platform for localized therapy of AD. Our work expands the conventional research scope of BiVO4 into the biomedical fields by demonstrating BiVO4’s strong capability of dissociating Aβ aggregates and alleviating Aβ-induced cytotoxicity.”