Enhanced recombination rate is achieved on a novel plasmonic platform that exploits the spontaneous formation of a V-pit-texture on the surface of a light-emitting diode. 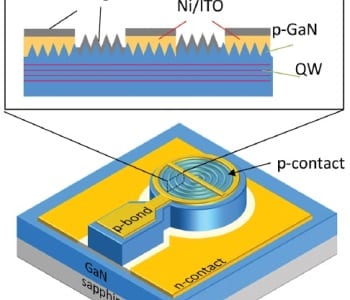 Besides illumination, there is a growing interest to use light-emitting diodes (LEDs) for short-range visible-light communications (VLC). VLC could help relieve the congested radio frequency traffic and add new capabilities to solid-state lighting installations. 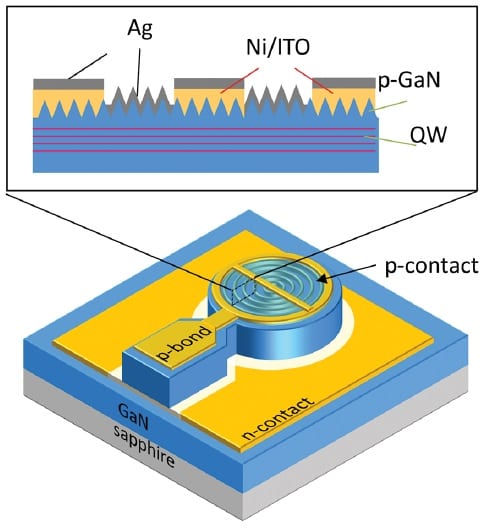 However, driving illumination LEDs at high speed for fast data transmission is still a challenge. There are ways of increasing the slow carrier recombination rate of semiconductor LEDs with the use of photonic crystals and resonant cavities, however, these methods require expensive and tedious fabrication processes, making them unattractive for industry adoption. Plasmonics structures, when placed in close proximity to emitters, have the ability to enhance the optical properties of these emitters, such as the carrier recombination rate and emission intensity. The near-field requirement for such plasmon–quantum well (QW) coupling places a fundamental restriction on its implementation in a conventional InGaN LED.

Researchers from Singapore have now overcome this limitation by using a novel plasmonic platform that exploits the spontaneous formation of hexagonal V-pits at the surface of In-containing GaN. Traditionally, texturing with V-pits has been used to increase the light-extraction efficiency of InGaN LEDs. By depositing a Ag or Al film on top of a textured V-pit in a blue InGaN LED, these researchers were able to create a high density of sharp metal-coated V-pits separated at a distance of about 120 nm from the QW. Interestingly, the plasmonic interaction at the V-pits can still occur over a range of 120 nm, which is longer than the fringing field of 50 nm for a surface plasmon mode on a flat surface. A significant enhancement of the carrier recombination rate of up to 15 times is demonstrated, pushing the intrinsic speed limit to 7 GHz. This is a low cost and scalable method of increasing the modulation speed of LEDs, without the need for expensive, tedious, nanopatterning processes. Such a design can be integrated into LEDs operating at different wavelengths and can be easily adopted by industry. This will have an immediate impact on VLC technologies and opens up new opportunities for LED applications.

The PicoQuant 25th Single Molecule Workshop
Electronics that Imitate Life: A Sensing Robotic Hand
The art of Kirigami and paper electronics
High performance supercaps made from cotton waste and seawater