Solid-state lighting based on light-emitting diodes (LEDs) is the most efficient source of high color quality white light. Nevertheless, they show significant performance limitations such as the “efficiency droop”. Blue laser diodes operated in stimulated emission offer a potential alternative. 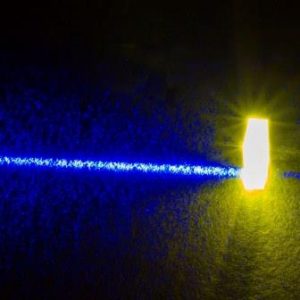 Solid-state lighting (SSL) has recently become competitive with conventional light sources and is now the most efficient source of high color quality white light ever created. At the heart of SSL is the light-emitting diode (LED). The current standard architecture for SSL is the phosphor-converted light-emitting diode (PCLED) in which high-brightness InGaN blue LEDs are combined with one or more wavelength-downconverting phosphors to produce composite white light of virtually any color temperature and color rendering quality. Despite this success, blue LEDs still have significant performance limitations, especially a nonthermal drop in efficiency with increasing input power density called “efficiency droop” which limits operation to relatively low input power densities, contrary to the desire to produce more photons per unit area of the LED chip and to thereby make SSL more affordable.

An alternative could be a blue laser diode (LD). LDs can in principle have high efficiencies at much higher input power densities than LEDs. Above the lasing threshold, parasitic nonradiative recombination processes, including those likely responsible for efficiency droop in LEDs, are clamped at their rates at lasing threshold. Indeed, at high input power densities state-of-the-art, high-power, blue, edge-emitting LDs already have reasonably high (30%) power-conversion efficiencies, with the promise someday of even higher efficiencies. A team from Sandia National Laboratories, Albuquerque (NM, USA) and Corning Incorporated, Corning (NY, USA) compared LEDs and LDs and discuss their economics for practical SSL.