Laser as Sniffer Dog for Explosives 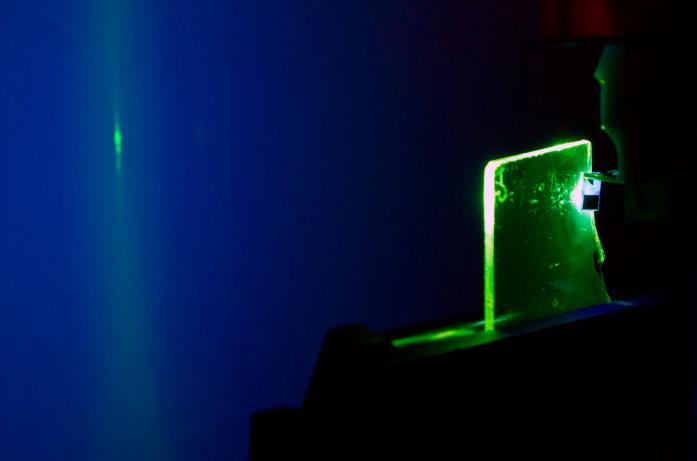 A new compact sensor system based on an LED pumped polymer laser detects explosive vapors quickly and sensitively. This is a promising approach for the detection of hazards, for example in humanitarian demining. 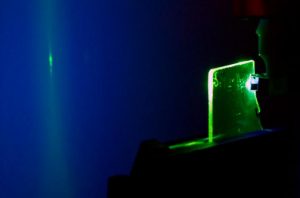 The rise in international terrorism has required both sensitive and low-cost detecting methods for explosives. Currently, there are many different techniques used to detect explosives, classified as electromagnetic imaging, trained animals and spectrometry. Mass and ion mobility spectrometry, gas chromatography, surface-enhanced Raman spectroscopy along with fluorescent polymers have been used for the detection and quantification of trace explosive chemicals. Organic semiconductor lasers (OSLs) are particularly promising for sensing explosive vapors with high sensitivity and rapid response. The principle behind is that the presence of the strongly electron-deficient nitroaromatic explosive molecules quenches light emission in the organic gain medium, increasing the laser threshold and reducing the output light. Yet, another criterion for a practical explosive vapor sensor is portability. To make conjugated polymer laser sensors meet this requirement, the main challenge is to reduce the size of the pump source. Now, a team led by Graham A. Turnbull and Ifor D.W. Samuel demonstrates the first explosive vapor sensor based on an LED-pumped polymer laser.

The newly developed very compact sensor is based on a distributed feedback polymer laser pumped by a commercial InGaN light-emitting diode. The laser emits a 533 nm pulsed output beam of ~10 ns duration perpendicular to the polymer film. Tests with model explosives revealed, that the new sensor can detect 8 ppb after only a 90-second exposure of the polymer laser to the vapor. The lasing threshold increases, causing the laser emission intensity to drop dramatically.

The scientists are convinced that these highly sensitive and inexpensive LED-pumped polymer laser sensors could be used in humanitarian demining, complementing existing technologies such as ground-penetrating radar leading to an improvement in the detection of hazardous objects.