Research team paves way to scale up manufacturing of large objects using a fully compostable bioplastic made from shrimp shells. 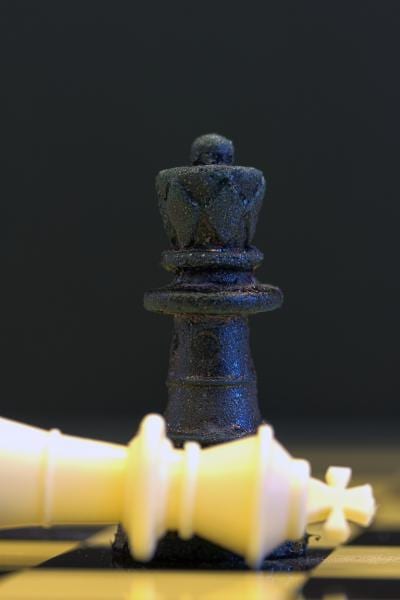 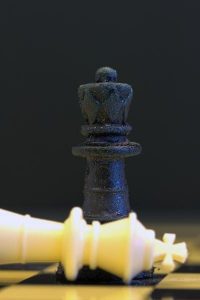 The Wyss Institute researchers molded a series of chess pieces made of their chitosan bioplastic, demonstrating a new way towards mass-manufacturing large, 3D objects with complex shapes made of fully compostable materials. Image: Harvard’s Wyss Institute.

Researchers at Harvard’s Wyss Institute have developed a method to carry out large-scale manufacturing of everyday objects – from cell phones to food containers and toys – using a fully degradable bioplastic isolated from shrimp shells. The objects exhibit many of the same properties as those created with synthetic plastics, but without the environmental threat. It also trumps most bioplastics on the market today in posing absolutely no threat to trees or competition with the food supply. The advance was reported online last week in Macromolecular Materials & Engineering.

Most bioplastics are made from cellulose, a plant-based polysaccharide material. The Wyss Institute team developed its bioplastic from chitosan, a form of chitin, which is a powerful player in the world of natural polymers and the second most abundant organic material on Earth. Chitin is a long-chain polysaccharide that is responsible for the hardy shells of shrimps and other crustaceans, armor-like insect cuticles, tough fungal cells walls – and flexible butterfly wings.

The majority of available chitin in the world comes from discarded shrimp shells, and is either thrown away or used in fertilizers, cosmetics, or dietary supplements, for example. However, material engineers have not been able to fabricate complex three-dimensional (3D) shapes using chitin-based materials – until now.

The Wyss Institute team, led by Postdoctoral Fellow Javier Fernandez, Ph.D., and Founding Director Don Ingber, M.D., Ph.D., developed a new way to process the material so that it can be used to fabricate large, 3D objects with complex shapes using traditional casting or injection molding manufacturing techniques. What’s more, their chitosan bioplastic breaks down when returned to the environment within about two weeks, and it releases rich nutrients that efficiently support plant growth.

“There is an urgent need in many industries for sustainable materials that can be mass produced,” Ingber said. Ingber is also the Judah Folkman Professor of Vascular Biology at Boston Children’s Hospital and Harvard Medical School, and Professor of Bioengineering at the Harvard School of Engineering and Applied Sciences. “Our scalable manufacturing method shows that chitosan, which is readily available and inexpensive, can serve as a viable bioplastic that could potentially be used instead of conventional plastics for numerous industrial applications.”

The advance reflects the next iteration of a material called Shrilk that replicated the appearance and unique material properties of living insect cuticle, which the same team unveiled about two years ago in Advanced Materials. They called it Shrilk because it was composed of chitin from shrimp shells plus a protein from silk.

In this study, the team used the shrimp shells but ditched the silk in their quest to create an even cheaper, easier-to-make chitin-based bioplastic primed for wide-spread manufacturing.

It turns out the small stuff really mattered, Fernandez said. After subjecting chitosan to a battery of tests, he learned that the molecular geometry of chitosan is very sensitive to the method used to formulate it. The goal, therefore, was to fabricate the chitosan in a way that preserves the integrity of its natural molecular structure, thus maintaining its strong mechanical properties.

“Depending on the fabrication method, you either get a chitosan material that is brittle and opaque, and therefore not usable, or tough and transparent, which is what we were after,” said Fernandez, who recently won the Bayer “Early Excellence in Science” Award for his achievements in materials science and engineering.

After fully characterizing in detail how factors like temperature and concentration affect the mechanical properties of chitosan on a molecular level, Fernandez and Ingber honed in on a method that produced a pliable liquid crystal material that was just right for use in large-scale manufacturing methods, such as casting and injection molding.

Significantly, they also found a way to combat the problem of shrinkage whereby the chitosan polymer fails to maintain its original shape after the injection molding process. Adding wood flour, a waste product from wood processing, did the trick.

“You can make virtually any 3D form with impressive precision from this type of chitosan,” said Fernandez, who molded a series of chess pieces to illustrate the point. The material can also be modified for use in water and also easily dyed by changing the acidity of the chitosan solution. And the dyes can be collected again and reused when the material is recycled.

This advance validates the potential of using bioinspired plastics for applications that require large-scale manufacturing, Fernandez explained. The next challenge is for the team to continue to refine their chitosan fabrication methods so that they can take them out of the laboratory, and move them into a commercial manufacturing facility with an industrial partner.